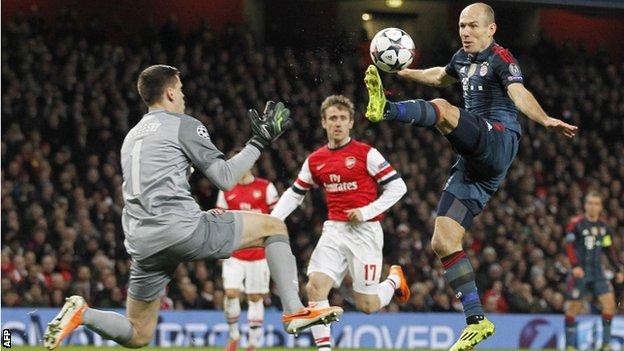 Arsenal look destined to perish at the same stage of the Champions League and against the same opponents as last season after Bayern Munich won convincingly at Emirates Stadium.

Pep Guardiola's side remain on course in their bid to become the first side to retain the Champions League as second-half goals from Toni Kroos and Thomas Muller gave them an emphatic advantage in their last-16 first-leg tie.

It will be a night of regrets for Arsenal manager Arsene Wenger and his players after Mesut Ozil's careless early penalty was saved by Bayern keeper Manuel Neuer and opposite number Wojciech Szczesny was sent off before half-time for fouling Arjen Robben in the area.

David Alaba was also wasteful as he hit the post from the resulting penalty - but there was no escape for 10-man Arsenal after the break as Bayern's greater numbers and quality proved decisive.

The outstanding Kroos scored spectacularly from 20 yards just after half-time and substitute Muller headed in the second two minutes from time.

Arsenal won 2-0 in the second leg last season, going out on away goals, but it is hard to see them producing the three-goal winning margin they require against a Bayern side that are arguably stronger under Guardiola than it was when they claimed the crown last season.

Manchester United manager David Moyes was an interested spectator and it is likely Bayern's Kroos was the object of his attentions after being linked with a move to Old Trafford.

On this evidence, however, Kroos is a player of such pedigree that he belongs in the Champions League, somewhere United are increasingly unlikely to be next season. It is also hard to see such a talent being allowed to escape by Bayern.

Wenger delivered a selection surprise by starting with Yaya Sanogo up front ahead of the experienced Olivier Giroud - and the 21-year-old was prominent as Arsenal and Bayern set the tone for a wonderfully entertaining opening half.

Szczesny showed superb reactions and athleticism to dive high to his left to save from Kroos while Neuer demonstrated equal expertise to make a low stop from Sanogo.

Arsenal were making an uninhibited start and were rewarded with a penalty after only nine minutes when Ozil was fouled by Jerome Boateng as he tried to turn inside the defender.

Ozil took the penalty but - just as when he missed against Marseille in the group stage - the run-up was hesitant and the spot-kick feeble, allowing Neuer, his childhood friend, to thrust up a hand to save.

Arsenal suffered a setback before the interval as Kieran Gibbs went down injured and was replaced by Nacho Monreal before another moment of drama as half-time approached.

Kroos showed his vision to create an opening for Robben, who was fouled by Szczesny as they challenged for the ball. Italian referee Nicola Rizzoli awarded the penalty and sent off Arsenal's keeper.

Santi Cazorla was the player sacrificed as Lukasz Fabianski replaced Szczesny in goal. He was not called into action as Alaba rolled another poor penalty against the outside of the post.

Bayern made their numerical superiority count as they took the lead nine minutes into the second half. Kroos had been majestic all evening and his finish was no different as he swept Philipp Lahm's pass high past Fabianski with a first-time finish with his right foot.

Guardiola's men were now dominating and Fabianski did well to save from Robben when he was afforded far too much space inside Arsenal's area.

And Robben was close again with a trademark curling left-foot effort from the right wing that was only inches away from the far post with Fabianski beaten.

The second goal had been threatened and it arrived via Muller's stooping header - and there was almost time for a final flourish from Kroos when he sent a low shot against the post.

It is unlikely to prove decisive.