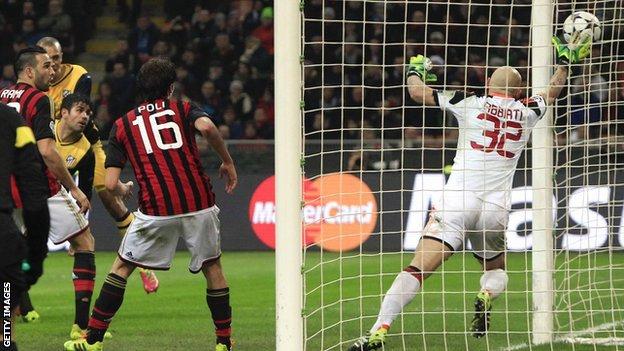 Costa powered home at the back post to beat a Milan side that earlier had the better chances.

Visiting goalkeeper Thibaut Courtois tipped on to the woodwork from Kaka and Andrea Poli respectively.

Raul Garcia, who blazed over, looked to have wasted Atletico's best opportunity before Costa's intervention.

From a corner on the Atletico right, Milan defender Ignazio Abate's attempted clearance travelled almost straight up into the air.

With that, Milan coach Clarence Seedorf was consigned to defeat on his managerial debut in a competition he won four times as a player.

He would have earlier been encouraged by an energetic Rossoneri display far removed from the domestic struggles that sees them lie ninth in Serie A.

On his Champions League bow, Adel Taarabt, on loan from QPR, grew in confidence on the Milan right, while Kaka showed glimpses of the ability that saw him crowned world player of the year in 2007 - the last time Milan lifted the Champions League trophy.

After a bright Atletico start, Milan warmed to their task, with a move down the right involving Taarabt eventually feeding Kaka.

The Brazilian's curling shot from the corner of the box was deflected, before the flying Courtois finger-tipped the ball on to the bar.

Soon after, the Belgian on loan from Chelsea was forced into another, even better, save. This time, Taarabt's cross found Poli six yards out, with the header pushed on to the post.

More chances would come for the home side - Kaka curling on to the roof of the net from a Mario Balotelli backheel, before the former Manchester City man fired narrowly wide from distance.

Still, it was to Courtois that Atletico were indebted, the Spanish side only managing weak headers from Costa and Garcia in the first period.

Atletico, though, were one of only three unbeaten teams during the group stage and have the confidence of a side level on points with Real Madrid and Barcelona at the top of La Liga. As Milan tired, Diego Simeone's men came to the fore.

Gradually pressing Milan back, Los Rojiblancos could have taken the lead when Garcia was found on the edge of the six-yard box, only for his shot to fly high over the bar.

A goalless opening leg loomed, but that was to discount 25-year-old Costa's decisive contribution eight minutes from the full-time whistle.

There was still time for Adil Rami to drive from distance, but with his effort travelling wide, Milan were beaten and pushed towards a fifth successive knockout defeat at the hands of Spanish opponents.

AC Milan coach Clarence Seedorf: "On the whole the lads showed a lot of spirit and determination and I also saw some great individual performances.

"At the end we were tired and we perhaps paid for our efforts. It's a positive result for them but the tie is not over. I know the Vicente Calderon well but the stadium also knows me."

Atletico Madrid coach Diego Simeone: "In the first half, our goalkeeper's performance was fundamental.

"In the second, it was Diego Costa who made the difference by taking advantage of the chance that came to him.

"We know that it will still be difficult in the second leg. We have taken a solid step but there is so much still to play for at the Vicente Calderon."