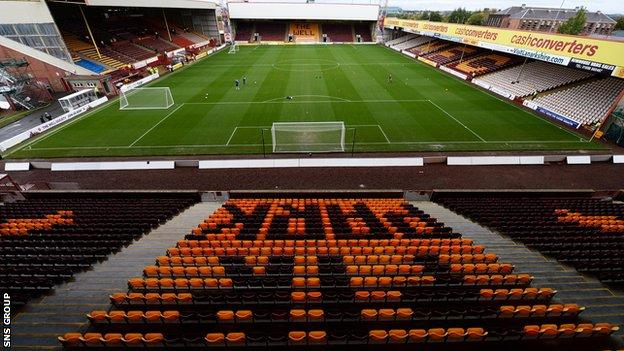 Motherwell made a loss of £184,500 last season, despite their best-placed finish in the league for 18 years.

The club told shareholders that a mid-season redistribution of wealth among top flight clubs had been one of the major factors in posting the deficit.

They say "generous bonuses" were honoured based on pre-season agreements while prize money for second spot was cut by about £900,000 in January.

That fee was for Jamie Murphy's move to Sheffield United last January.

Turnover for the year was up more than £650,000 to almost £5.2m, mainly as a result of the club's participation in the Champions League and Europa League qualifiers.

The board stressed that the Well Society fan ownership project was "critical" to the club's long-term sustainability.

The fans' group, which has two representatives on the board, bought £150,000 worth of shares last season to help Motherwell through a temporary cash-flow shortage and the club are set to borrow more money from the society.

The club, who do not have any bank debt, previously borrowed in times of need from former chairman John Boyle, who is still owed money.

Motherwell, who made a loss of about £600,000 in the previous season, cut their player budget in the summer but are one point behind second-placed Aberdeen in the Scottish Premiership, with a game in hand.