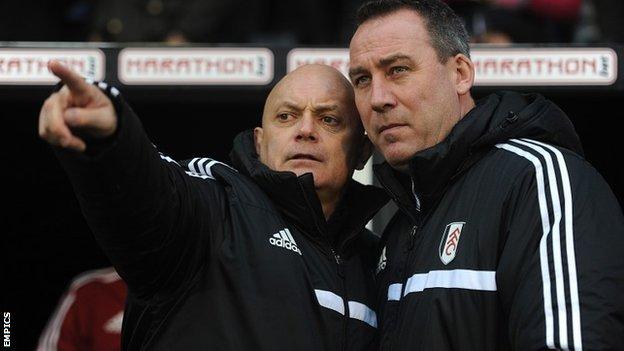 The Cottagers replaced Meulensteen as boss with Felix Magath on Friday but the Dutchman had said he remained under contract at the club.

The trio, who were only appointed in the past four months, leave along with coaches Mick Priest and Jonathan Hill.

As part of the changes, Tomas Oral comes in as first-team coach and Werner Leuthard is the new conditioning coach.

Meulensteen came into the club as head coach in November and replaced Martin Jol as manager less than three weeks later.

He brought in Curbishley as first-team technical director on Christmas Day and Wilkins as assistant head coach on 30 December.

However former Manchester United coach Meulensteen, who won four of 17 games in charge, was not mentioned in a club statement announcing Magath's arrival.

Chairman Shahid Khan told the club website: "I'm very grateful to Rene, Alan and Ray, as well as Mick and Jonathan, for their commitment to Fulham. Their efforts were admirable and appreciated, and I wish them the best.

"Felix has come to Fulham with purpose and exceptional confidence, and I know he's extremely pleased to have Tomas Oral and Werner Leuthard join him for the mission ahead.

"From today forward, the focus is singularly on winning football matches and remaining in the Premier League. The work has begun."