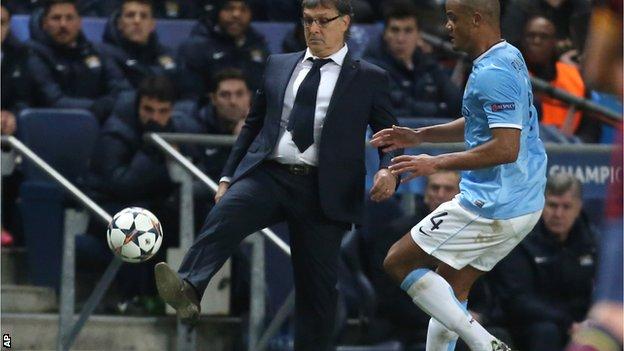 Barcelona coach Gerardo Martino insists his side's Champions League tie with Manchester City is not over despite the Catalans' victory at Etihad Stadium.

Barca won the first leg of their last-16 clash 2-0 after City had defender Martin Demichelis sent off.

Martino said: "It is true we have played well away and we have got the result we came for.

Barcelona's share of the possession over the course of the first leg was 68.4%

"But I am not confident. We cannot forget that City lost to Bayern Munich at home this season, but won away."

In the group stage of this season's competition, City were defeated 3-1 at home but rebounded with a 3-2 triumph in Munich.

The return leg of the last-16 meeting is at the Nou Camp on 12 March and Martino feels his players cannot afford to lose their concentration at any point of that fixture if they are to remain in control of the tie.

"We have to play then with the same intensity and commitment we did in this game," Martino added.

"City are almost at the same level - the only difference is that we scored twice.

"Now we have to repeat that performance. We will start the second leg as if it is 0-0."