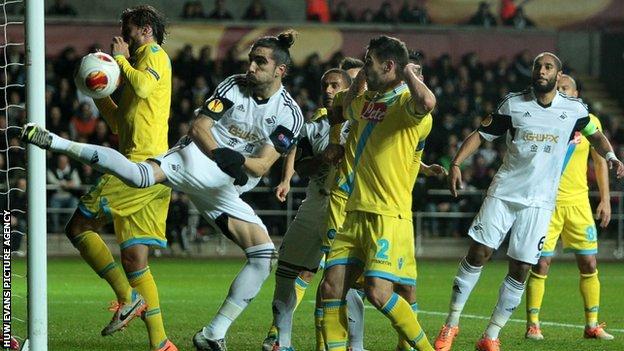 Swansea City were denied victory by fine goalkeeping as they were held to a goalless draw by Napoli in the round of 32 first leg.

The home side impressed in an entertaining first half with visiting keeper Rafael Cabral denying Wilfried Bony, Wayne Routledge and Angel Rangel.

The second leg takes place next Thursday in Italy.

Swansea head coach Garry Monk, in charge for only his fourth match since replacing Michael Laudrup, described the game as the biggest test of his fledgling coaching career.

Monk was up against the experienced Rafael Benitez, who led Chelsea to Europa League success last season having previously managed Valencia to a Uefa Cup win in 2004.

The Italians looked dangerous early on when Jose Callejon dragged his effort wide of Michel Vorm's post within the opening three minutes.

Vorm denied Marek Hamsik before opposite number Rafael made an equally good save to deny Nathan Dyer in what was a frenetic start to the game.

Bony unleashed a shot from the edge of the area but his effort flew wide of the post and Dyer's cross from the right eluded the Ivorian.

Swansea were playing with confidence and purpose, encapsulated by a move in which their top-scorer Bony came close to breaking the deadlock.

Pablo Hernandez threaded a pinpoint pass to the feet of the striker, who took too much time on the ball which allowed Rafael to make the save.

There was no respite for the Napoli defence with Jose Canas firing over the crossbar and the unmarked Williams heading over following Hernandez's corner.

Keeper Rafael was kept busy, getting a fingertip to Routledge's long-range drive before tipping full-back Rangel's header over the bar from the resulting corner.

Brazilian Rafael did not reappear for the second half after picking up an injury and he was replaced by on-loan Liverpool keeper Pepe Reina.

Napoli made a promising start with Gonzalo Higuain cleverly played in by Callejon but Vorm came off his line quickly and the Argentine striker fired over the bar.

Callejon got the better of Ben Davies before unleashing a curling effort wide of the post but the second half was not played at the same high tempo of the first 45 minutes.

Swansea had offered little in the second half until captain Williams' powerful header from substitute Jonathan de Guzman's excellent delivery was beaten away by Reina.

De Guzman wasted a free-kick from a promising position, firing over the crossbar, before Reina palmed away Routledge's curling shot as Swansea stepped up the pressure.

Another chance went begging as the game entered the final six minutes, the unmarked Chico Flores heading straight at Reina after connecting with De Guzman's free-kick.

Swansea's efforts deserved a goal but their performance against the side currently third in Serie A will have given them confidence ahead of next Thursday's daunting second leg in Naples.