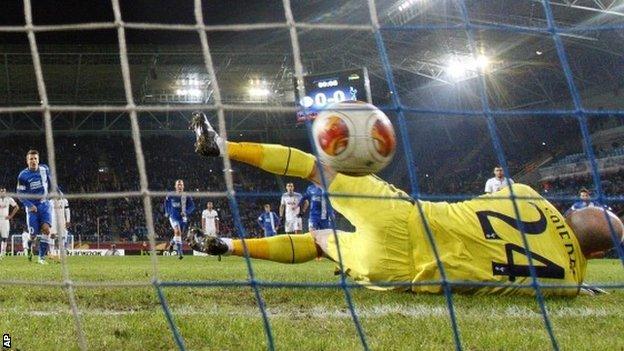 Roberto Soldado was guilty of a dreadful miss as Tottenham suffered a narrow defeat by FC Dnipro in the Europa League round of 32 first leg.

The former Valencia striker fired over from four yards out from Paulinho's low cross when the game was goalless.

Yevhen Konoplyanka took advantage of Soldado's miss by scoring from the penalty spot after Jan Vertonghen had fouled Matheus.

It could have been worse for Spurs, Roman Zozulya heading against a post.

It means Spurs have it all to do in the return leg on 27 February after a highly satisfactory night for Dnipro's former Tottenham manager Juande Ramos.

The tie took place against the backdrop of violent unrest in Ukraine's capital Kiev, about 220 miles from the Dnipro Arena in the eastern Ukrainian city of Dnipropetrovsk.

There was a minute's silence before kick-off as a mark of respect to those who have lost their lives, while there was a sparse crowd inside the 31,000-capacity ground as some home supporters opted to boycott the tie.

A much-changed Spurs side acquitted themselves well on a difficult surface before a combination of poor defending and woeful finishing brought about their first defeat in nine Europa League games this season.

Matheus was a handful throughout, the Brazil-born forward denied by an excellent save by Brad Friedel after the Spurs defence had been carved open in the 25th minute.

Tottenham had scored 23 goals in their previous eight Europa League games, yet they were anything but clinical in Ukraine, Nacer Chadli screwing an easy chance horribly wide in the 28th minute.

Spurs had a penalty appeal turned down when Paulinho went sprawling under a 35th-minute challenge by Ivan Strinic, the referee awarding a free-kick on the edge of the area rather than pointing to the spot.

Then came Soldado's miss in the 56th minute, the ball hitting the Spaniard's shin with the goal at his mercy after Paulinho had got behind the home defence.

Friedel saved well from Giuliano before the late penalty drama.

Vertonghen could have few complaints after placing his arm on Matheus's shoulder before pulling him back.

Konoplyanka, a Liverpool target during the January transfer window, kept his composure to leave Tottenham with serious work to do in the return leg to stay in the competition.