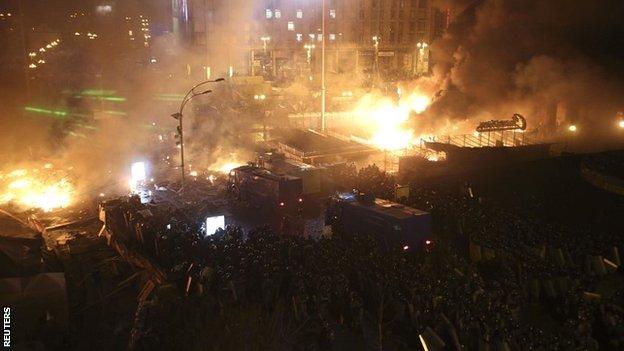 Dynamo Kiev's Europa League tie with Valencia on Thursday has been moved to Cyprus because of continuing violence in Ukraine's capital city.

Uefa said the match will be played at the GSP Stadium in Nicosia at 18:00 GMT after "security" concerns.

Protesters and police have clashed in Kiev, leading to 25 deaths.

But Tottenham's Europa League match against Dnipro, also in Ukraine, is due to go ahead as Dnipropetrovsk is nearly 300 miles away from Kiev.

Uefa said it will continue to monitor developments.

Both games are in the last 32 of the Europa League.

Protests in Kiev began in late November, when Ukrainian president Viktor Yanukovych rejected a landmark association and trade deal with the EU in favour of closer ties with Russia.