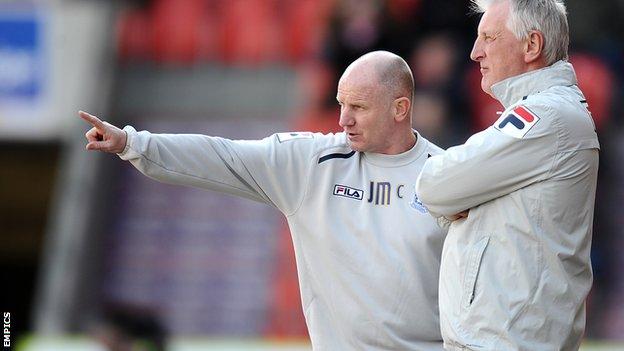 Moore, 61, has been suspended by Rovers until a Football Association investigation into a potential breach of betting rules is completed.

"I'm no stranger to taking over in these situations," said McMahon, who has had two previous spells in temporary charge at Prenton Park.

"Hopefully the players can get some points and start looking at safety."

The allegation against Moore relates to regulations which prevent him from betting on any competition in which his club is involved.

The FA has neither confirmed nor denied that Moore was the subject of an investigation by its integrity unit.

McMahon, who has also worked at Liverpool and Shrewsbury, was due to take control of Tranmere for the first time at Crawley on Tuesday.

But the game was postponed around 75 minutes before kick-off because of a waterlogged pitch, meaning a fruitless 500-mile round trip to Sussex for a side currently 18th in League One.

Speaking to BBC Radio Merseyside, McMahon continued: "It is [frustrating] considering the travelling we've put in. We're trying to do things right and prepare right, which we have done.

"But then when you look at the pitch, it's obviously the right decision and there's nothing we can do about it."