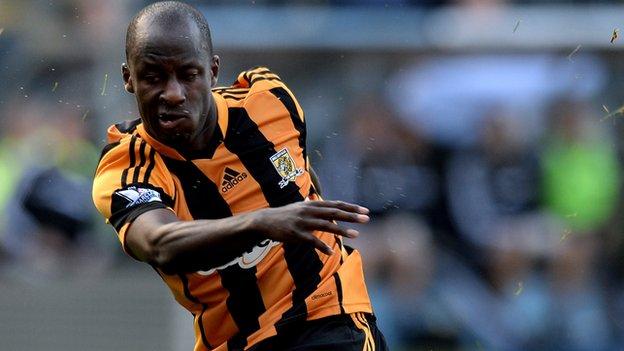 Fit-again Hull City forward Sone Aluko insists he has not given up hope of going to the World Cup with Nigeria.

The former England youth international switched allegiances five years ago and made his Super Eagles debut in 2009.

Aluko, 25, has not played for his country since June 2012 and has been overlooked for next month's friendly against Mexico in Atlanta, Georgia.

However, Aluko is hoping the fact he is back playing for Hull City could enhance his chances.

"I believe I do have a chance of making the World Cup squad, even though I have been out of the squad for a long time," he told BBC Sport.

While his older sister, Eniola, chose to play for England, Aluko said it was an easy decision for him to pick Nigeria: "England gave me my football education and I enjoyed the youth set-up but it was an easy choice to fly with the Eagles."

"Until the 'Big Boss' (Stephen Keshi) decides the team then many players will believe they still have a chance and I'm no different, we all want to be in Brazil playing.

"There's enough time and matches, which hopefully should be enough to break into the Super Eagles team again.

"More importantly really, my main focus is to recapture my form and end the season strongly with Hull. As long as I keep playing well and my club keep winning, I'll have strong hopes."

And Aluko can take some positives from the fact that Keshi has hinted the forward could play for Nigeria again.

"I've read a few comments and compliments regarding me through the press that the coach or an official has said but that's all," added Aluko.

"That's completely normal though I don't expect them to be calling around every player who's around the squad or previously had call-ups to find out how they are or what they're doing.

"It would be extremely time consuming. I trust that they're keeping track of how players are performing at their clubs so that's the most important fact."

On Monday, Aluko made his first start for Hull since returning from injury and made a significant contribution as a late strike from Yannick Sagbo helped the club to snatch a 1-1 draw with Brighton and earn a replay in the FA Cup fifth round.

He said: "It was just good to be back starting a game. That in itself was a big milestone for me after the last four months and to complete 90 minutes was very enjoyable too.

"I'm glad the team are still in the tie and that I got the assist for Sagbo's goal in the end too.

"As the match went on I thought I grew into the game more and played better in the game because I wasn't happy with the start.

"So all in all it was a positive return really, hopefully we go on to win the replay at home and move on into the quarter final."