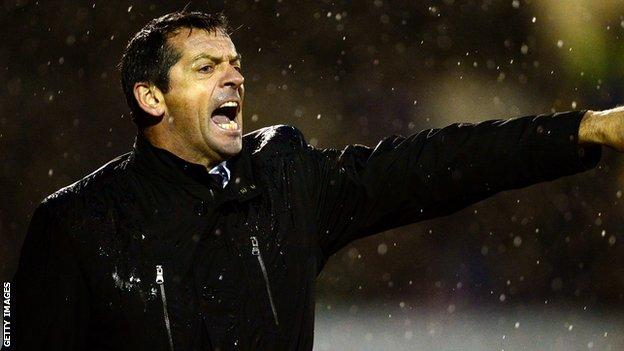 Southend United boss Phil Brown believes his side are finally starting to recover from the disappointment of losing to Hull in the FA Cup.

The Shrimpers have not won in five League Two games since the cup exit and drew 1-1 with Hartlepool on Tuesday.

"I fully think the wind has been knocked out of our sails since Hull," 54-year-old Brown told BBC Essex.

"It looked like our time when you have a dodgy spell. Tuesday was about the performance and that was there."

Brown's side put in a tireless display against the Premier League Tigers in January, but lost 2-0 at Roots Hall after a run beforehand of just two defeats in 19 league games.

Southend have won three of their last 13 league games, after winning seven of their previous 11

However, three defeats and two draws since then have seen seventh-placed Southend lose ground on the teams in the automatic promotion spots.

The Shrimpers are hoping to receive good news on the fitness of defensive pair Luke O'Neill and Luke Prosser, who have been suffering with ongoing thigh and calf injuries respectively.

"The two Lukes are both going for scans. It's becoming slightly mysterious why both players are not out there," said Brown.

"I think it's a balancing act. I hate recurrence of injuries. Once they're fit, they're fit and that's it. We'll get more information from the specialists."