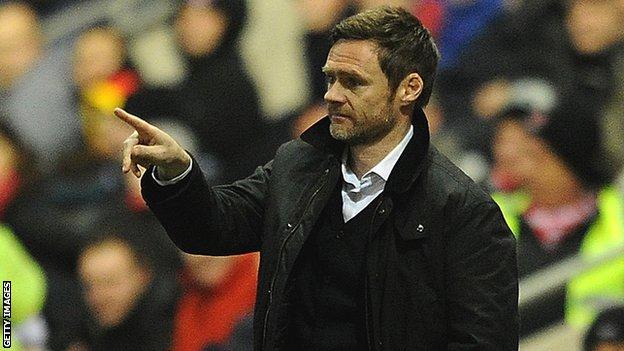 Graham Alexander says a first-leg home defeat by Chesterfield in the northern area final was to blame for Fleetwood's Football League Trophy exit.

The Cod Army trailed 3-1 going into Tuesday's second leg, and a 1-0 win at the Proact Stadium was not enough to see the Lancashire club to Wembley.

Manager Alexander said: "The lads were fantastic. They've left everything out on the pitch tonight and won the game, but it wasn't enough.

"The damage was done at Highbury."

The former Preston, Burnley and Scotland full-back, 42, told BBC Radio Lancashire: "It's hurting the lads, and me, because we would have loved to have got to Wembley for everyone at the club.

"We've got to make sure we have this pain inside us to drive us to better things in the league."

Jon Parkin's stoppage-time winner gave Fleetwood, who had beaten four League One clubs on their way to the northern area final, late hope of an unlikely comeback.

But Alexander admitted the Spireites were worthy of progressing.

"It's glorious failure, which we don't want," he added: "We want ugly wins and ugly success. But if you're going to go out, that's the way to go out.

"We've given it a right good go against a good team and, over the two legs, Chesterfield probably deserve to be in the final. We gave three sloppy goals away at Highbury and that's what has cost us."

Chesterfield will face Peterborough, who beat Swindon on penalties in the southern area final, at Wembley on 30 March.