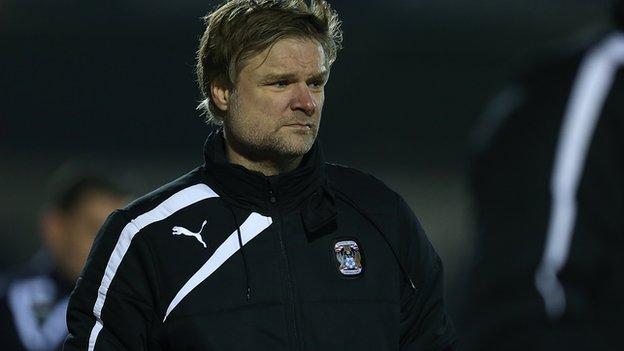 Clarke moved to Wolves in January after scoring 18 goals, while 15-goal Wilson has not played since dislocating his shoulder on New Year's Day.

"We now have to find a different way to win," 40-year-old Pressley told BBC Coventry and Warwickshire.

"Finding a way to adapt is my responsibility and part of my job."

The Sky Blues were beaten by Carlisle at their adopted Northampton home on Tuesday, a second successive League One defeat.

It left them in 13th place in the table, eight points clear of the relegation zone, but 12 adrift of the play-off places, after starting the season with a 10-point penalty.

Clarke's last league game for the Sky Blues was their 1-1 draw at Preston on 18 January and in the four matches since, Coventry have lost three and only scored three times.

"Obviously we've had both Callum and Leon for a long period of time, but we now have to find new ways to win games. It's something we need to look at going forward," Pressley said.

Wilson has been back in light training following an operation on his shoulder, but Pressley will not press him into action before he is ready.

"He's been involved in contact training and he's come through very well. The temptation would be to push him for the weekend, but we've got to look at the bigger picture and he should be fine for Shrewsbury [2 March]."

Meanwhile, loan signing Nathan Delfounesco is continuing to struggle with a knee injury.

He missed Tuesday's game and remains doubtful for the trip to Tranmere on Saturday.

"He trained on Monday, but came out after 20 minutes, so he wasn't there [in terms of fitness]," Pressley added.

"That's something else we have to deal with, I'm not a manager to look for excuses, I have to find solutions."