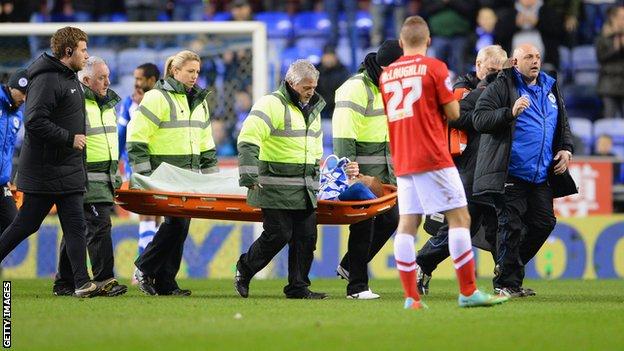 Wigan have confirmed that Ben Watson suffered a double leg break in Tuesday's win against Barnsley and is likely to miss the rest of the season.

The midfielder, 28, left on a stretcher during the first half and has fractured both his tibia and fibula.

Watson, who is out of contract this summer, also broke a leg against Liverpool in November 2012.

"To lose a player and a person of Ben's quality is a big blow to us but we will regroup," said manager Uwe Rosler.

"We need to move on as a squad and keep trying to achieve our goals for the season, with the added incentive now of doing it for Ben."

Rosler revealed shortly after his appointment as manager in December that he was keen for the former Crystal Palace man to sign a new contract with the Latics, who are only one place off the Championship play-offs.

His injury is in a different place to the one he suffered against Liverpool and is not considered career-threatening.

"Ben recovered last time and went on to experience the high of scoring that goal at Wembley, and write himself into the heart of every Wigan Athletic supporter," Rosler added.

"He is a terrific professional, a fighter, and I am sure he will return from this latest setback."