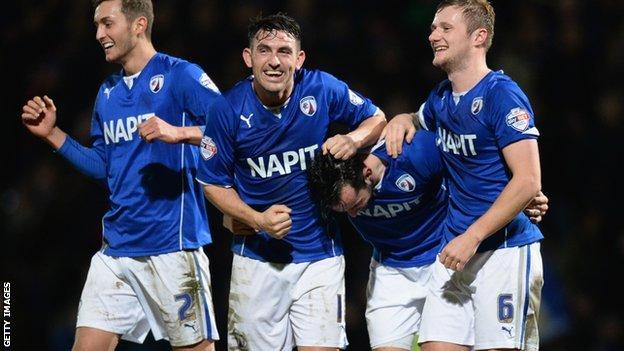 Chesterfield skipper Ian Evatt has said the players will not be distracted from their promotion push after reaching the final of the Johnstone's Paint Trophy.

The Spireites, who are top of League Two, booked their place in the Wembley showpiece with a 3-2 aggregate win over Fleetwood Town.

"It's at the back of our minds now," he told BBC Radio Sheffield.

A home from home

Evatt is in line for his fourth Wembley appearance. He helped Blackpool to play-off success in 2007 and 2010 before being on the losing side with the Seasiders in 2012.

"It's a great achievement to get there but our main aim this season is to win this league."

He added: "This group of players is so focused on getting this team to where it needs to be.

"We wanted to reach Wembley and we wanted to get promotion. We've done the first thing and we're top of the table so we just have to maintain that."

The 32-year-old is in his second spell with Chesterfield after rejoining from Blackpool in the summer.

Evatt thanked the supporters for their "amazing" backing after reaching the final of the competition for the second time in three seasons, having won it in 2012.

"I'm delighted for the fans," he said. "This is a fantastic club and the support we have had from them this season, especially in some away games, has been nothing short of amazing.

"I'm married to a local girl, I live in the area and I know how much this club means to the people here and it is important we give them something to cheer about."

Chesterfield will face Peterborough, who beat Swindon on penalties in the southern area final, at Wembley on 30 March.