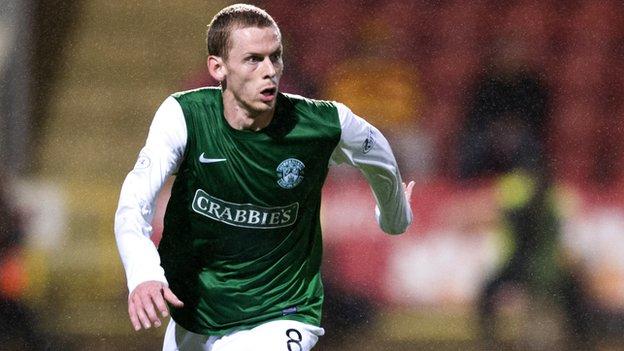 Hibernian midfielder Scott Robertson will be sidelined for a further six to eight weeks due to a knee injury.

The damage was done in an Under-20s match last week, with the 28-year-old included to improve his match fitness after an idle period.

Robertson had missed the loss to Celtic through suspension and was an unused substitute in the following Scottish Cup defeat to Raith Rovers.

"It's a hammer blow for him and the club," said manager Terry Butcher.

"It will take time to heal then there is the rehab and then he'll need to get his fitness back up again."

The former Dundee United and Blackpool player moved to Easter Road last January, having been released from his contract at Bloomfield Road after playing just one game in six months with the Seasiders.

Twice capped for Scotland, Robertson has been a first-team regular at Hibs, scoring once in 25 appearances this season.

Fellow central midfielders Kevin Thomson and Owain Tudur Jones have been on the injured list of late and there is mixed news on the duo.

Thomson is closing in on a return, although the 29-year-old was told he was free to find a new club last month.

"Kevin Thomson is back in full squad training but has only had four sessions," added Butcher on Hibernian TV. "So he's still quite some way off in terms of fitness and sharpness. But it's good to see him in action again.

"Owain Tudur Jones has had an injection in his hamstring and that will need a week or two to settle down and then there's a couple of weeks of inactivity. He's looking at five weeks out at least."