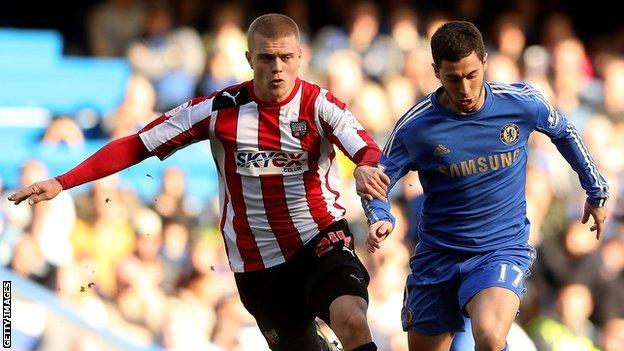 Considering Brentford's Jake Bidwell started out as a goalkeeper, he has made the transition to playing at left-back in the Football League look simple.

Following a January in which he set up three goals to help the League One leaders continue their unbeaten run - one that stretches back to October - the 20-year-old has been named the Football League's young player of the month.

"I'm delighted as there are some great players who have won the award over the last few months," Bidwell told BBC Sport.

"The more pleasing thing is the way the team are playing. We are top of the league and if your team is not doing so well you probably don't get these awards.

"I'm just happy to be playing in a good side which is playing well at the minute."

Bidwell: From Toffees to Bees

Joined the youth academy at Everton aged 11, initially as a goalkeeper

Joined Brentford on loan in November 2011

After a second loan spell with the Bees last season, Bidwell made the move to London permanent in summer 2013

Apart from a short period on the sidelines with an ankle injury earlier in the campaign, Bidwell has been a regular for the Bees this season.

They are currently on a 19-match unbeaten run, but face a stern test on Saturday when they welcome third-placed Wolves to Griffin Park.

"We are in good form and I don't think they will particularly want to come to Griffin Park and play us," Bidwell said.

"It is just another game and you can only get three points. Hopefully we will get the job done and move on to the next one.

"There are a lot of good teams up there and it is going to be tough. We are doing OK at the minute so hopefully we can keep that going until the start of May."

With Leyton Orient also in the hunt for automatic promotion, Brentford manager Mark Warburton is not getting ahead of himself as the race to reach the Championship reaches its climax.

However, he insists reaching the top of the table has not happened by chance.

"The players are working hard every single day and applying themselves, resting and recovering," Warburton said.

"There's a hunger and a passion to move forward. If you can't enjoy these times you shouldn't be in the game.

"We are top of the table and there for a reason as we have played some great football.

"Wolves have won their last five games and are third in the table so they are obviously doing something right.

"They have some very good players and a very experienced manager. We are aware of the test but always respect the opponents."

Jake applies himself so well. He always does extra after training working on key aspects of his game. He has the desire and hunger to learn and there is loads more development still to come

Bidwell has recently passed the milestone of 100 appearances for Brentford after initially arriving at the club on loan in November 2011.

"I did a couple of years at Everton as a goalkeeper up until under-13s," he said.

"I wasn't really enjoying it so the plan was to go and play with my mates. As it turned out I did all right and ended up going back to Everton as a centre-half and then a left-back."

Bidwell made his senior debut for the Toffees at the age of 16 in a Europa League tie against BATE Borisov in December 2009, but had to wait two years for a taste of league football, only making his first appearance when he joined the Bees.

The former England youth international went on to play 25 games for the club in 2011/12, then enjoyed a season-long spell with them last year before making permanent switch to Griffin Park last summer.

"There has not really been a massive change from coming on loan to permanent.

"I just saw it as coming back to Brentford really rather than signing. You don't really sit back and think about it but then all of a sudden you have played 100 games."

Brentford narrowly missed out on both automatic promotion and reaching the Championship through the play-offs last season, but bounced back strongly to mount another challenge.

"We came very close last year and I thought I owed it to them to come back this year, have another crack at it and get the job done," said Bidwell.

"Nothing is won in January or February. We need to keep our form going until the end of the season. With the way we are playing at the minute we will be able to do that hopefully."

Current Brentford boss Warburton has been instrumental in Bidwell's development.

Having brought the youngster to Griffin Park during his time as sporting director, he has been impressed with the left-back's desire to improve.

"Jake is 20 years of age and has played 100 games already. That is a testament to his attitude on and off the pitch," Warburton told BBC Sport.

"He applies himself so well. He comes in every morning to work. He always does extra after training, working on key aspects of his game.

"He felt at the start of the season his crossing wasn't where it needs to be and people have seen the impact this season, with him crossing the ball and the number of assists he has had.

"He wants to be the best he can possibly be. He is an outstanding young professional.

"He has the desire and hunger to learn. There is loads more development still to come and I believe he can play at the highest level."

Victory against Wolves on Saturday would edge Brentford, and Bidwell, three points closer to a possible promotion and a place in the second tier of English football for the first time since 1992-93.