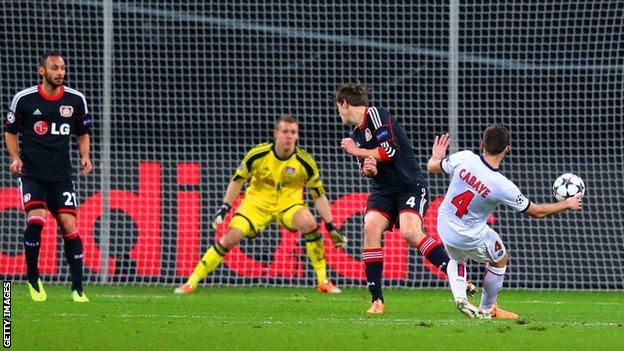 Paris St-Germain coach Laurent Blanc says his "ambitious" side are expecting a "very exciting end of the season" after all but securing a Champions League quarter-final place.

"Nothing will stop you from thinking we are one of the favourites," said Blanc.

I've played for fantastic teams, but you can say a team is great when you win trophies

No side have ever recovered from 4-0 down after a first leg to progress in the history of the Champions League.

The second leg is at the Parc des Princes on 12 March and Blanc, whose side are five points clear in the French league table, believes his side have a lot to look forward to between now and May.

"We reproduced the kind of soccer we were playing in the first half of the season," the former Manchester United defender said. "Obviously I am very happy with the performance.

"We were excellent. We witnessed, in my opinion. a great team. We can count on everyone."

The last time Leverkusen reached the Champions League knockout stages, they were beaten 10-2 on aggregate by Barcelona at the same stage of the competition.

They have never won the Bundesliga, finishing runners-up four times between 1997 and 2002, and were beaten in their only Champions League final in 2002 by Real Madrid.

Tuesday's defeat was their sixth defeat from their last eight matches, leaving them on the verge of a European exit and 16 points behind Bundesliga leaders Bayern Munich.

"You can't say that it all went wrong," said Leverkusen coach and former Liverpool defender Sami Hyppia. "You also have to look at what kind of team we faced. Paris are a top-class opponent and they were excellent."