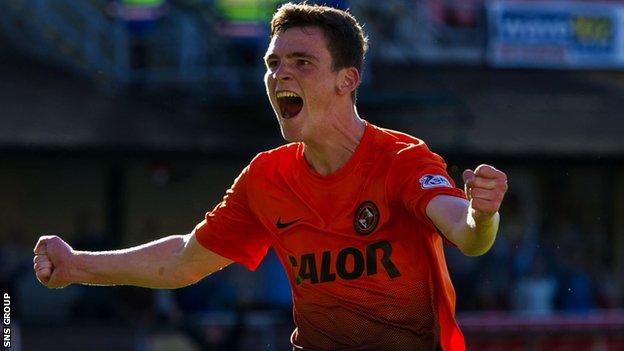 Dundee United left-back Andrew Robertson never dreamed of a Scotland call-up in his first season as a full-time professional.

But the 19-year-old is sure he can handle the occasion after being selected by manager Gordon Strachan for next month's friendly in Poland.

"I believe I can make the leap into international football," he told BBC Radio Scotland.

"It's not being big-headed, it's just trying to be confident in yourself."

This time last year, Robertson was playing for amateurs Queen's Park in the bottom tier of Scottish senior football.

But the defender, who loves to get forward, has enjoyed a fantastic start to his United career.

It's almost like a Roy of the Rovers story, when you hear where Andy came from

The teenager has scored five goals in 30 appearances and his form quickly led to a call for Scotland's Under-21s.

"A lot of people have been surprised by what I've done at United but I always believed I could make it at this level," added Robertson.

"But I didn't expect anything like this (being in the Scotland squad), this season.

"Playing with experienced players at United like Mark Wilson and John Rankin has helped me through.

"I'm still learning every day in training and that will continue for years to come and I know I can improve a lot."

Robertson's football education will take another step when he joins Strachan's squad for the game in Warsaw on 5 March.

"He's a top manager and obviously you are playing with top players," he enthused.

"Darren Fletcher is back and he's playing at the highest level, so I can only really learn from the period that I'm away."

Club-mate Wilson played under Strachan during his time at Celtic and, while he concedes the call-up is the stuff of comic books, he thinks Robertson's selection is fully merited.

"It's almost like a Roy of the Rovers story, when you hear where Andy came from," Wilson told BBC Scotland.

"But it's what he deserves because he has been by far the best left-back in Scotland this season.

"And to keep that consistency for seven months in your first term in the league is pretty special."

Wilson, back for a second spell at Tannadice, also believes his old boss will relish working with an emerging talent like Robertson.

He added: "Gordon Strachan is someone who can bring your game on leaps and bounds; I found that when I worked with him - some of his training drills are fantastic.

"If you've got the right temperament, Gordon really takes a shine to you.

"He likes hard work and Andy fits the bill."