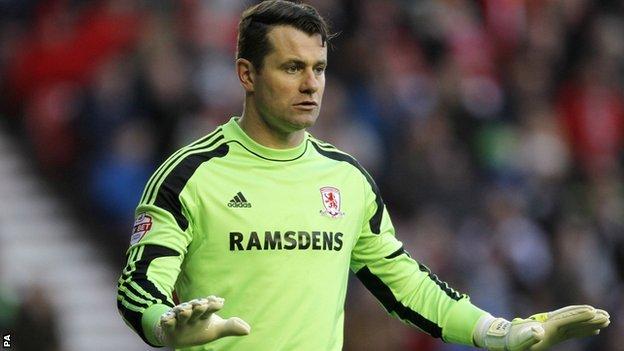 Middlesbrough goalkeeper Shay Given is "gutted" that his loan spell ends after Saturday's match against Leeds United.

The 37-year-old has kept nine clean sheets in 15 games since in November.

After Saturday, he will have been with the Teessiders for 93 days, the maximum permitted under an emergency loan.

"I'd like to have stayed for the rest of the season but the decision was out of my hands. I've had a great time and loved every minute," he told BBC Tees.

Before signing Shay Given, Middlesbrough had conceded 26 times in 16 Championship matches. With the Irishman between the sticks, opponents have managed just 10 goals in 15 games.

"I'm looking forward to the Leeds game, but quite honestly there's some sadness there - I'm gutted to be leaving."

The former Newcastle United and Republic of Ireland keeper had when he moved to the Riverside.

But he has enjoyed a successful stint with the Championship club, making several crucial saves to help Boro become one of the meanest defences in the division and eliciting a ringing endorsement from the Middlesbrough supporters.

"I've been delighted with the reaction from the fans as I didn't know how my Newcastle connection would go down," Given explained.

"There's always an element of trepidation when you join a new club but I couldn't have been made to feel more welcome."

Given is only the sixth player to have represented Newcastle, Sunderland and Middlesbrough.

Last week, Boro announced that they had signed Real Madrid goalkeeper Tomas Osorio on loan for the rest of the season in anticipation of Given's departure.

Initially, the Irishman was brought in as cover for the first choice Jason Steele after he was injured and sent off in at Elland Road.

Ironically, he will bow out on Teesside against the opponents that triggered his North East return.

"I was grateful for the chance to play football again and now there are plenty of keepers with Steele back fit, " Given added.

"I'm really happy with how we've done defensively, but it would have been nice to have won more recently (Boro are winless in five).

"Clean sheets are great, but I'd take a 10-9 win against Leeds. This club is geared up for the Premier League and just needs to get back on a roll."