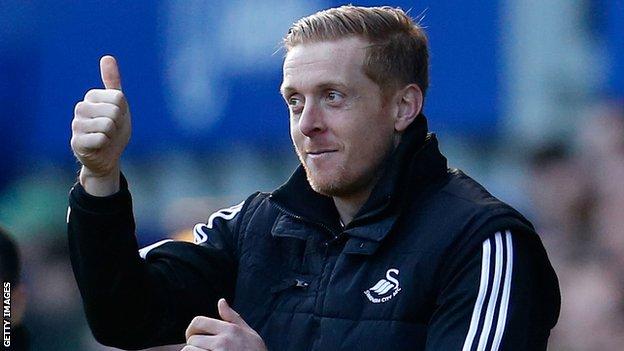 Garry Monk says he is "level-headed" enough to face the biggest test of his fledgling coaching career when Swansea host Napoli in the Europa League.

Monk, named interim manager after Michael Laudrup was sacked on 4 February, will lead the Swans as they tackle the Italian giants in the last 32 on Thursday.

"Of course, I never expected to be in this position," Monk said.

"But I am prepared. I am a level-headed lad, I know what I want to do."

The 34-year-old defender has taken charge of three matches since stepping up from the playing ranks to replace Laudrup, securing a 3-0 victory over Cardiff and a 1-1 draw at Stoke in the Premier League, before falling to a 3-1 defeat at Everton in the FA Cup fifth round last Sunday.

But the first-leg clash against Napoli at the Liberty Stadium is Monk's biggest test so far.

He said: "I was a player going into training one moment, then taking charge of games we have had already - like the south Wales derby and now against Napoli - so it's a whirlwind.

The priority is staying in the Premier League, that is fundamental for the club, but nights like this don't come around very often

"Napoli are one of the best teams in Europe. I have seen a lot of their games and studied them. They have good players all over the pitch.

"At this moment in time, they are one of the most powerful clubs in terms of what they can spend and the quality of players they have, so we are in for a tough time.

"But it is a game we are really looking forward to.

"The priority is staying in the Premier League - that is fundamental for the club. But nights like this don't come around very often.

"We want to put on a performance we can be proud of. That is the mentality I've had since I have come in, and we will take it into this game."

Monk made a number of changes for the FA Cup trip to Everton last weekend with on eye on their midweek European test.

While it is likely he will revert to a more familiar line-up against Napoli, there will be no return from injury for star striker Michu, who is recovering from ankle surgery he underwent in December.

"It's been difficult," Monk added. "He came back into training, but he is still feeling soreness. We had to pull him out of training and he has to have an injection.

"It's nothing serious, but he needs two days' complete rest and we can build him up. He won't be available (against Napoli), which is disappointing for him and us. He was eager to get out there, but sometimes you can push yourself too much."

Swansea have played 10 matches in this season's Europa League to get to this stage of the competition, which included a 3-0 away win against Spanish side Valencia.

Napoli, who missed out on qualifying for the Champions League knock-out stage on goal difference, host the Swans for the return leg at the Stadio San Paolo on 27 February.

The Italians have won their last three matches, scoring eight goals and conceding one.