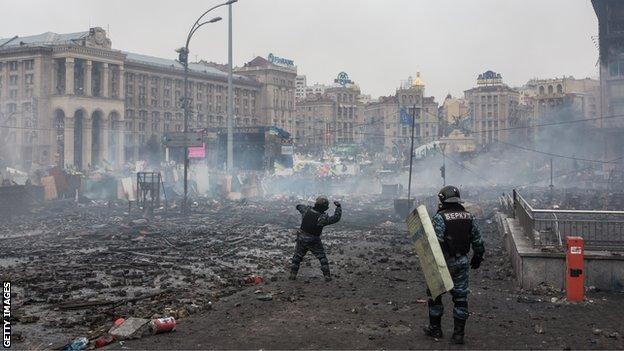 Tottenham's Europa League tie against Dnipro is still scheduled to go ahead on Thursday, despite plans for a day of mourning in Ukraine following at least 26 deaths in violent protests in Kiev.

Dnipro are based in Dnipropetrovsk, 220 miles away from the Ukrainian capital.

"As it stands there is no indication [the round-of-32 first-leg match] will not go ahead," said a Uefa spokesman.

"We are just concentrating on playing football and getting the game out of the way," said Spurs boss Tim Sherwood.

"It is never great to see scenes of violence in any country at any time. It is not something we concentrate on."

Spurs said on Wednesday on their official website: "We remain in contact with the British Embassy and have been advised that the police in Dnipropetrovsk have been briefed to expect British fans and the situation there is stable and under control.

"Once again travelling fans are advised to avoid gatherings and areas where demonstrations could occur such as public squares and administrative buildings during journeys to and from the stadium."

Ukraine's president, Viktor Yanukovych, has declared 20 February a day of national mourning for the victims of the clashes between police and anti-government protestors.

Dynamo Kiev's home Europa League tie with Valencia, also on Thursday, has been moved to Cyprus because of the continuing violence.

Citing "security" concerns, Uefa said the match would be played at the GSP Stadium in Nicosia at 18:00 GMT.