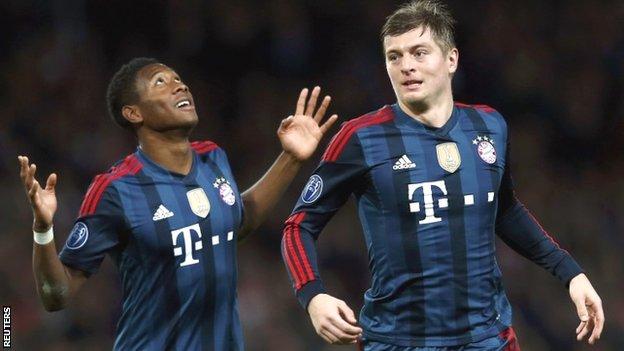 The Gunners had the better of the opening stages, with Mesut Ozil missing an early penalty, but were second best once goalkeeper Wojciech Szczesny had been sent off for fouling Arjen Robben.

The German champions set a Champions League record by completing 95% of their passes, but that was not the only way they were statistically dominant.

BBC Sport looks at the numbers behind the Bavarian giants' success.

The number of passes attempted by Bayern, 95% of which were successful. This success percent is a new Champions League record since accurate data recording began in the 2003-04 season.

The most passes attempted against Arsenal in the Premier League this season was the 624 by Swansea in September, while Fulham are the most accurate team against the Gunners in the league this season, completing 87.3% of their 479 passes in August.

The number of passes attempted by Arsenal. They completed 71.2% of them. The lowest number attempted by the Gunners in the Premier League this season was 394, against Tottenham in September. The most they attempted was 803 against Hull in December. 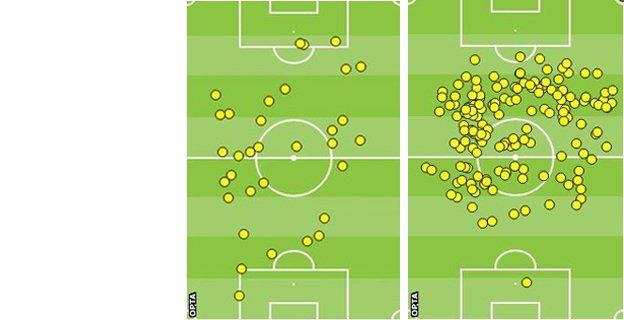 The number of passes attempted by Kroos in the Arsenal half - he completed 96.1% of them.

Toni Kroos's opening goal was the 100th that Bayern have scored in all competitions this season. Wojciech Szczesny's red card was also the 100th sending off at Arsenal since Arsene Wenger took charge in 1995.

Percentage of possession enjoyed by Bayern Munich over the 90 minutes.

The most passes attempted by an Arsenal player. Jack Wilshere completed just 66.7% of his 30 attempts.

Bayern's attempts on goal at the Emirates. Arsenal managed just eight - one in the second half.

Arsenal had just 12% of possession in the second half, with their passing accuracy down to 61.3% after the break.

Bayern Munich winger Arjen Robben is the only player to win three penalties in this season's Champions League. Mesut Ozil is the only man to miss two.