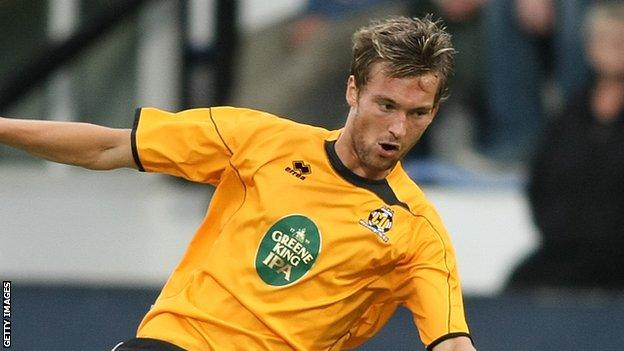 Cambridge United will be without winger Harrison Dunk for up to eight weeks because of a knee ligament injury.

The 23-year-old was injured while winning a free-kick against Alfreton last week, but managed to play the whole game, which Cambridge lost 1-0.

"He could be a while," boss Richard Money told BBC Radio Cambridgeshire.

"There doesn't appear to be any damage to the cartilage, but we have to wait for the ligament to heal. He's going to be six or eight weeks."

An eight-week absence would sideline him until mid-April, with the Conference Premier play-offs to be played between 30 April and 18 May.

Dunk has been one of the U's best players this season, contributing to a promotion push which currently sees them second in the Conference Premier - but only the champions earn automatic promotion.

But the injuries are stacking up for Money, who has midfielder Ashley Chambers out with a foot injury and striker Adam Cunnington sidelined for a further month after a groin operation.

"Personally, from new year, I don't think we've had particularly good protection from the man in the middle," said Money.

"We've put together a group of players that can create and excite the crowd. I think people have looked at that and we've come in for some treatment."