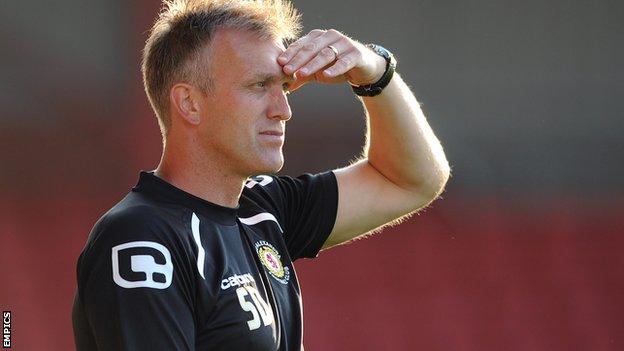 Crewe boss Steve Davis insists family pride is irrelevant as his sons prepare to face each other at Port Vale.

It is believed Saturday's A500 derby at Vale could mark a Football League first in which brothers face each other, as their father manages one of the sides.

Joe, 20, has made eight appearances for Vale while Harry, 22, has played 30 games for his father this season.

"From the boys' perspective, they will want to game to be about the teams and not them," Davis told BBC Radio Stoke.

Two versus One family rivalries

Then-West Ham boss Harry Redknapp could rely on his nephew Frank Lampard scoring a penalty in a 2-2 draw with a Liverpool side that included Harry's son Jamie in February 1999.

"All the hype about myself and the two lads playing is nice from a personal level, but they are both very professional about it and know its all about getting the three points on the day.

"They have been brought up right and understand what football is all about - it's a team game rather than an individual game.

"If it happens, it happens and it would be brilliant for the family."

Sibling and even father and son rivalries are not uncommon in sport, with numerous clashes among kin over the years.

The most famous in recent years was a World Cup first when Kevin-Prince Boateng faced half-brother Jerome when Ghana faced Germany in 2010.

While delighted by the prospect of a tense League One family gathering at Vale Park, Davis is not showing any hint of support for his youngest son on this occasion.

Joe, a defender like his older brother, has started eight games for the Valiants since returning from a loan spell at Luton in January.

"It's about winning the game for the respective clubs - certainly from my point of view it is more important for us that we get the three points," boss Davis said.

"If it turns out that they face each other, they will want to win - they are both determined and are very competitive."