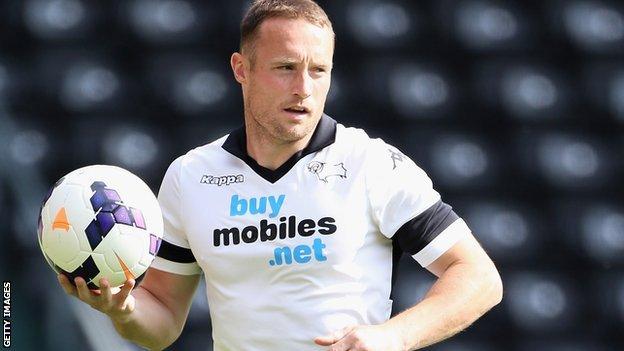 Sheffield United loan signing Ben Davies says he would not have dropped out of the Championship for any other team.

The 32-year-old midfielder joined the League One side on loan from Derby to the end of the season on Wednesday.

He told BBC Radio Sheffield: "This is a massive club that is going places and I'm delighted to have got it done now.

"Derby had a few calls but this is the only club outside of the Championship that I was interested in joining."

The former Notts County and Shrewsbury man played under Blades boss Nigel Clough for the Rams.

He came on as a second-half substitute in Wednesday's 1-0 win at Gillingham, despite not reaching the ground until minutes before kick-off.

"It dragged on a bit and I was still sat in the office at Derby at 15:30 and then got picked up to get brought down here an hour later," he added.

"I arrived at the back of the tunnel just as the lads were coming out on to the pitch.

"Fortunately we got there in the end and I was able to help out in a massive win."

He could make his full debut for the struggling Blades, who moved out of the relegation zone with victory over the Gills, against Bristol City at Bramall Lane on Saturday.