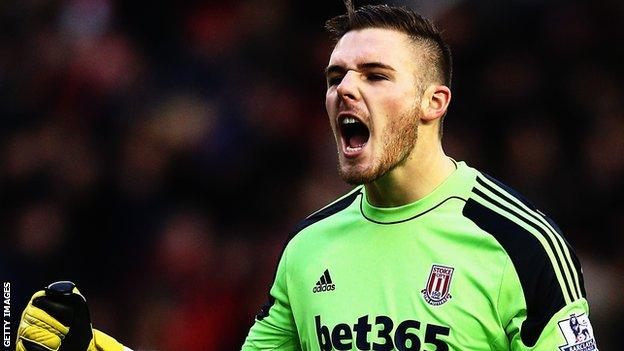 Leeds United have signed Stoke City goalkeeper Jack Butland on loan until the end of the season.

The 20-year-old England international, who had a spell on loan at Barnsley earlier this season, has made four appearances for the Potters this year.

Jack Butland became the youngest ever England international goalkeeper when he played against Italy in August 2012 at the age of 19 years 158 days.

At that stage, his only first-team football had been on loan with Cheltenham in League Two.

He could make his debut for Leeds in Saturday's trip to Middlesbrough.

Butland, who played for Great Britain in the 2012 Olympics, rejected talks with Chelsea so he could join Stoke from Birmingham last January.

He spent the rest of the season on loan at Blues before moving to the Potters in the summer.

However, he has been third choice for much of the season, only breaking into the team briefly following injuries to Asmir Begovic and Thomas Sorensen in January.

He told the club website: "I think that the move is good for all parties. I'm coming to a massive club with big expectations and hopefully a big promotion push.

"It ticks all the boxes in terms of the pressures on the game and the crowds. It's as close as you can get to Premier League football outside of the Premier League. I'm really excited to be here."