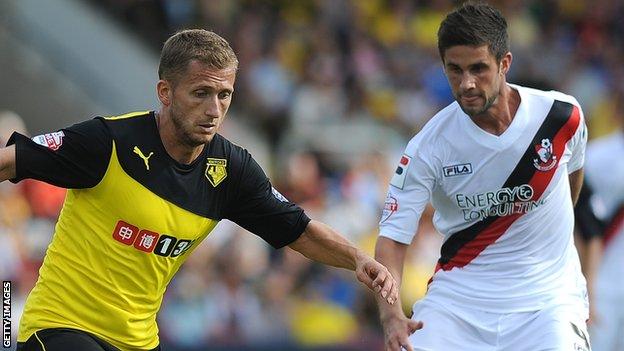 Watford remain uncertain on the prognosis of midfielder Almen Abdi, but insist his ongoing foot injury is not career threatening.

The 27-year-old has failed in numerous attempts to come back from a heel condition this season.

Plantar fasciitis is the medical term for the thickening of the plantar fascia.

The plantar fascia is a tough and flexible band of tissue that runs under the sole of the foot. It connects the heel bone with the bones of the foot, and acts as a kind of shock absorber to the foot.

The surrounding tissue and the heel bone can also sometimes become inflamed.

"We have to be sure that the final assessment is the correct one. As soon as we have the news we will tell you."

Abdi, the Hornets' player of the season last year, has not started a game since the end of August.

He has been suffering with a condition called plantar fasciitis, which causes pain in the ligament that stretches from the heel to the bones in the middle of the foot and also acts as a shock absorber.

The Switzerland international suffered a series of setbacks towards the end of 2013 and then looked to have recovered in January, when he made four substitute appearances.

But he has sat out all five of Watford's games this month.

Asked whether the injury was career threatening, Cesarini said: "Not at all."