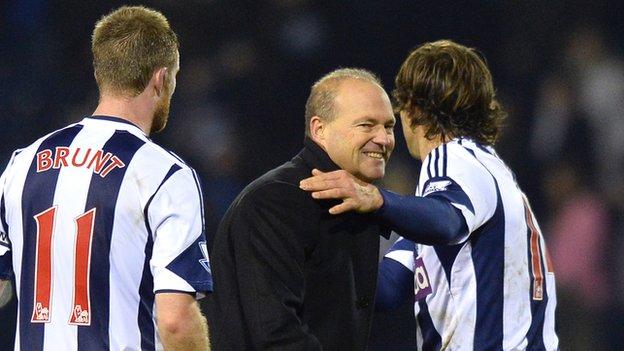 Albion, who are only above the bottom three on goal difference, have drawn three and lost two under the Spaniard.

Mel, 50, said a training camp in Jerez ahead of Saturday's Premier League home fixture against Fulham had been crucial for building squad harmony.

"West Brom is a family team and I am the dad - the players are my children," former Real Betis boss Mel told BBC WM.

While new Fulham boss Felix Magath has described Saturday's game as "probably the most important in this club's history", Mel only went as far as to say it is the biggest of his tenure to date.

"It's only the most important because it is the first match after the trip to Spain," said Mel.

"The last match [a 1-1 draw] against Chelsea, we played very well and now this is the way."

"We have a report from their last match against Liverpool, but it is no good because there has been a change of all their coaches.

"But, for me, it is still all the same because what is more important is my players, my team and my way of trying to win."