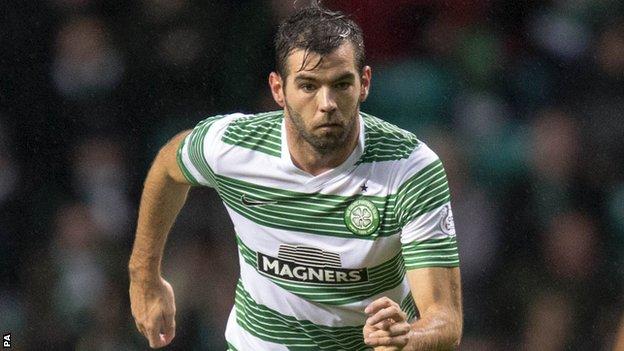 Joe Ledley says he was planning to sign a new Celtic deal when they accepted a bid from Crystal Palace.

The Welsh international, whose deal was due to expire in the summer, sealed a January deadline day move to the Premier League outfit.

"They (Celtic) offered me a contract and I was actually planning on signing," the midfielder told BBC Wales.

"I spoke to Palace and, for me, it was the right time to go."

I thought it was right for myself and for the club for me to move on and show the world, hopefully, what I can do in the Premier League

But, after penning a three-and-a-half year deal at Selhurst Park, he said he was relishing playing in the "best league in the world".

"I enjoyed every moment at Celtic and it's a fantastic club. It will always be with me in my heart," said Ledley.

"I was sat there on deadline day and it came through that the club had accepted a bid. I just thought that it was right for me to go.

"When a club accepts (an offer) then, obviously, they want some money.

"So, I thought it was right for myself and for the club for me to move on and show the world, hopefully, what I can do in the Premier League.

"It was tough. I had the Champions League for a long time and won medals; then you're getting a bit older and at my age - hitting your potential - and I thought it was time for me to play in the Premier League."