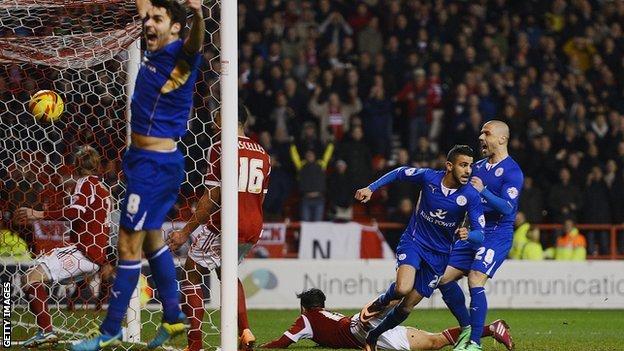 Leicester City manager Nigel Pearson says he has no doubt that recent signing Riyad Mahrez is ready to start games for the club.

The 23-year-old Algerian winger came off the bench to score the equaliser - his first City goal - in the 2-2 draw with Nottingham Forest on Wednesday.

He has made four substitute appearances and the Foxes boss has been impressed.

I think he will be able to cope. He is a very confident young man. It is choosing the right moment

"He's a quick learner, a quality player and I'd have no qualms about starting him," Pearson told BBC Radio Leicester.

"But we will do what we think is right for the group and him. I know he will be very keen to get his first start, but we will try to judge that for the right reasons.

"I think he will be able to cope. He is a very confident young man. It is choosing the right moment."

Pearson compared Mahrez's situation to fellow France-born winger Anthony Knockaert, who joined at the start of last season and has become a key player for the club.

"We had the same sort of situation last year with Anthony and I think it is important we protect our players from every-increasing expectations," the Foxes boss added.

"There is no doubt that when you come from a different style of league that there are going to be differences and sometimes you don't get the time to dwell on the ball in the English game that you might do in other European leagues."