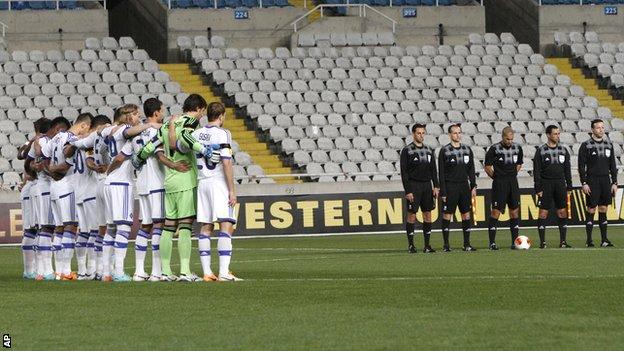 Dynamo Kiev were beaten by Spanish side Valencia in a Europa League last-32 tie moved to Cyprus after continuing violence in the Ukrainian capital.

In front of an almost empty stadium in Nicosia, Valencia claimed a 2-0 first-leg win with two second-half goals.

Juventus could become the third club - since the Uefa Cup/Europa League started to be decided by a one-off final in 1997-98 - to compete in the showpiece at their home ground. Feyenoord won the 2002-03 final in Rotterdam, while Sporting Lisbon lost the 2004-05 decider at the Estadio Jose Alvalade.

Porto and German side Eintracht Frankfurt, backed by around 7,000 travelling fans, shared an entertaining 2-2 draw in Portugal. The winners will face either Swansea or Napoli in the last 16.

Benfica, who lost to Premier League side Chelsea in last season's final, clinched a narrow 1-0 win at Greek side PAOK thanks to Brazilian forward Lima's second-half goal.

The Portuguese leaders could face English opposition in the last 16, with Tottenham or FC Dnipro awaiting the winners.

It has been a difficult week for Ukrainian champions Dynamo following violent clashes in Kiev, where tens of people have died since Tuesday in clashes just metres from their Valeriy Lobanovskyi Dynamo Stadium.

Governing body Uefa moved their home game against Valencia to the Mediterranean island because of security concerns.

Chile forward Eduardo Vargas, who signed on loan for La Liga side Valencia from Napoli last month, headed in the opener after 79 minutes. The win was sealed by an injury-time own goal from Dynamo defender Domagoj Vida.

With the Europa League final to be held in Turin on 14 May, Juventus are aiming to become the third team to contest the tournament showpiece at their home stadium.

But it was a far from convincing display by the Serie A leaders, who were eliminated from the Champions League group stage in December, against the Turkish visitors.

Following their 3-0 win at Ajax, FC Salzburg have now scored in 63 successive matches. The Austrians last failed to net on 2 December 2012 against Austria Vienna.

The visitors threatened to level Southampton loanee Osvaldo's first-half strike after the break, but were punished for their profligacy by ex-Manchester United midfielder Pogba's long-range effort in injury-time.

If Juve progress, they could face Serie A rivals Fiorentina in the last 16. The Viola earned a 3-1 win at Danish minnows Esbjerg to move a step closer to set up a repeat of the 1990 Uefa Cup final against Juve.

FC Salzburg cruised through the group stage with a 100% record and the Austrians continued their fine form in Europe by brushing aside Ajax in Amsterdam.

Salzburg skipper Jonatan Soriano scored a brace, including a phenomenal 50-yard lob from close to the halfway line.