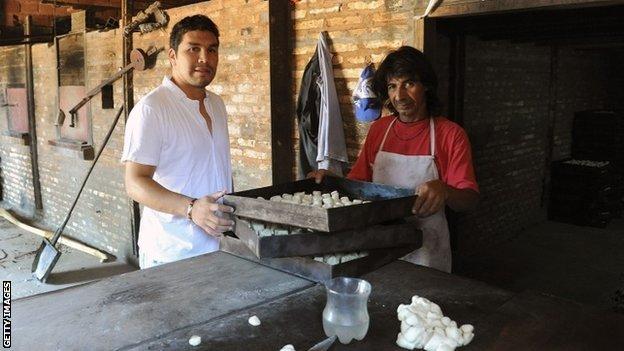 Salvador Cabanas was playing for Mexican side Club America and looking forward to representing Paraguay at the 2010 World Cup when he was shot in the head.

The incident happened in the toilet of a nightclub in Mexico City on 25 January 2010.

"I remember everything," recalls Cabanas of the incident that changed his life.

He was on his day off and in a nightclub with his wife. He went to the toilet when some guy approached him.

"I said 'Why? I came here to work because I need the money'. He said 'No, you're making much money and you're taking it to Paraguay, we are in need and working for you'. After that, he shot me."

Life and times of Cabanas

A bullet remained lodged in his head. It affected his memory, the sight in his left eye and the left part of his body.

Despite all of this, Cabanas attempted a comeback two years ago with Club 12 de Octubre, the side from his home town of Itaugua close to the capital of Asuncion where he began his career.

"Considering what had happened to me, and I came back - nobody would have imagined that," said Cabanas.

His club won promotion to the Paraguayan second division but Cabanas's story, uplifting though it is, is far from straightforward.

It is astonishing that he was able to make a return to playing at any level, but his life has been problematic since the shooting in 2010.

Now 33, he is separated from his wife and working at his family's bakery in Itaugua.

"After I got out of my Asuncion house following my separation, I came to live in my parents' house and start helping them with the family business which is the bakery," he said.

"It's not that I work in the bakery; I help them to deliver the products to the stores. I go with the driver and help him."

Cabanas claims that his wife did not support him as she should, that he gave her everything and he is now penniless.

There is talk of bank accounts that he no longer has access to, of the involvement of his former agent. He cannot remember the last time he saw his two children.

When asked if he thought his wife would try to turn his children against him, Cabanas told BBC World Service: "Of course I am, I don't trust her, more now because of all she did. Yes, I'm worried."

Cabanas estimates that he has lost £6m ($10m) and has almost nothing left.

"I have to work in 12 de Octubre and earn what I need for my expenses. I have the car. Apart from that, I have almost nothing on my name.

"I regret all my life for being at that nightclub. Even more because I was with my former wife who I loved so much and she did what she did."

Back in August 2011 he returned to the iconic Azteca Stadium, where he played for Club America, to appear for a few minutes for both sides in a friendly between his former team and Paraguay.

There is now talk that Nelson Valdez, a former Paraguay team-mate, wants to organise a match to help Cabanas raise some money.

Cabanas has hopes of developing a football academy and the money would come in useful.

But right now he is delivering fresh bread.