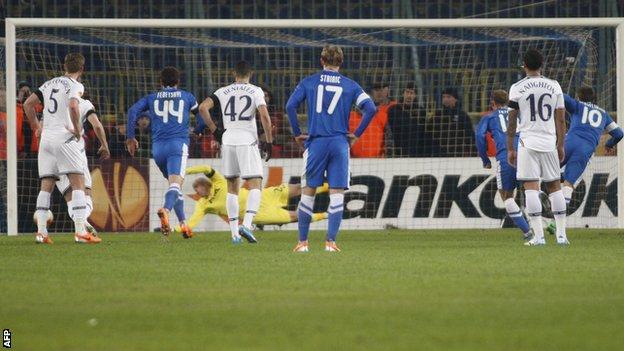 Spurs failed to score for the first time in 16 games in the competition after missing a string of chances.

Roberto Soldado was guilty of wasting their best chance, but Sherwood criticised the Ukraine pitch rather than his striker.

"I haven't seen it again, but I'm not sure he'll be too complimentary about the pitch," said Sherwood.

Nacer Chadli also spurned a chance but Soldado was the main culprit, the Spaniard firing over the bar from close range with the tie goalless.

It means Tottenham have work to do in the second leg on 27 February if they are to advance to the round of 16.

"He would expect to score," added Sherwood about Soldado's chance. "I am not using the pitch as an excuse, not for the chance, as both teams played on it.

"But I am sure that it must have played some part in Robbie missing that one.

"The pitch was a disgrace, it is possibly the worst pitch I have experienced in a long time."

Spurs had scored 23 goals in eight previous Europa League games. This was the first time they had failed to score in the competition since 22 November 2012.

Konoplyanka's penalty came after Jan Vertonghen had brought down Brazilian striker Matheus inside the box, but Sherwood is certain his side will play better in the return leg next week.

"We will score at White Hart Lane, guaranteed, but it depends how many we will have to score," he added.

Meanwhile, Ramos is looking forward to his return to north London for the second leg.

The 59-year-old Spaniard managed Tottenham for 12 months from October 2007, and masterminded the club's 2008 League Cup triumph.

His Dnipro side came close to adding a second, Roman Zozulya heading against the post in the closing stages.

"We were pretty close to scoring the second goal which would have been a great help for us in London, but still I have nothing but thanks to the players for what they did," said Ramos.

"We have 1-0 and we are looking forward to the second leg and will do our best there."