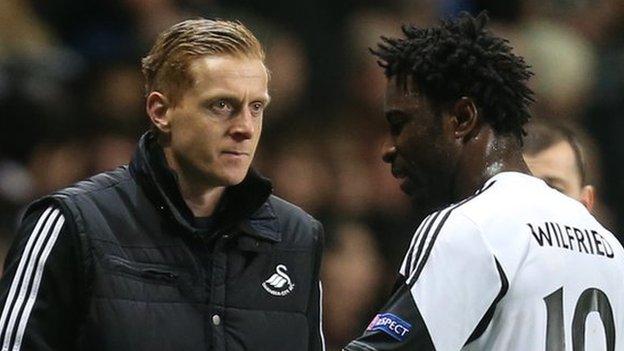 Head coach Garry Monk described his players as "magnificent" after Swansea held Napoli to a goalless draw in the Europa League's round of 32 first leg.

Swansea dominated the game and were denied by a series of saves, first from Napoli goalkeeper Rafael and then his second-half replacement Pepe Reina.

Monk says the result will give his players confidence ahead of next Thursday's second leg.

"What a performance that was from us. The boys were magnificent," Monk said.

"They can be really proud of themselves.

"Napoli are one of the top teams in Europe, so to put a performance like that on ... I said to the players afterwards the word was 'wow'.

"It's a great confidence boost for the players and something to take them forward with."

Monk's only disappointment was that his side failed to frank their fine display by scoring the goal that would have made their task in Italy a little less arduous.

"I think we deserved at least a couple of goals," he said. "There was some fantastic goalkeeping, and maybe a bit more clinical finishing would have done it.

The pressure is on them [Napoli]. They're going to have to come at us and have a go.

"All I worried about was us. I said before the game about putting in a performance we can all be proud of and I think the players more than did that.

"We kind of needed a goal. It makes our job a little bit more difficult going out there, but we have got nothing to lose when we go there next week."

Monk said the performance against the side currently third in Serie A showed his players were capable of competing at the top level.

The recently appointed head coach believes Swansea are in a good position to progress further, although he acknowledges they face a daunting task at the Stadio San Paolo.

"To be in with a shout, I guess that's all we could have asked for," Monk said.

"The pressure is on them [Napoli]. They're going to have to come at us and have a go.

"As I said [to the players] 'you've competed with them once and you can definitely compete with them again.'

"We have to be aware as well that it's a different environment, a very hostile environment that we are going to.

"But what an experience for the boys, myself, the staff and everyone at the club to go and have."