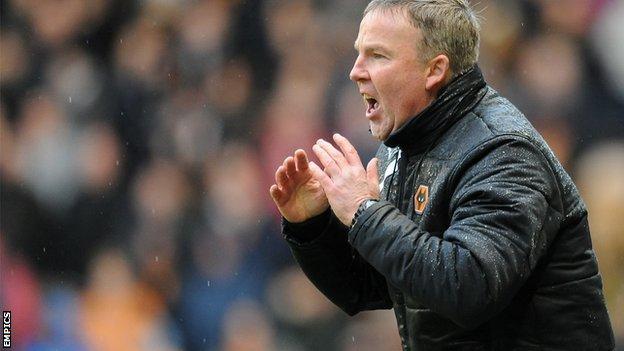 Wolves boss Kenny Jackett believes his side can only continue to improve by putting an emphasis on playing attractive football.

Wolves, on a five-game winning run, can go top of League One with victory at leaders Brentford on Saturday.

"We've always had some heart, spirit and defended well," he told BBC WM.

"On top of that you need to add style - some good football. We have slowly added that as the season has gone on and, we think, improved."

"We have definitely improved our play since the start of the season."

The Black County side were second in December when Jackett demanded his side start scoring more goals.

Wolves have the best defensive record in League One [and in all four divisions of English football] but, with 51 goals, still only have the fifth most prolific attack with fewer goals than both sides ahead of them.

Wolves giving nothing away

Wolves currently have the meanest defence in English league football, with only 20 goals conceded - one fewer than Chelsea.

The last league goal Wolves let in was a penalty by Sam Baldock for Bristol City on 25 January, meaning they have kept a clean sheet for 336 minutes (over five-and-a-half hours).

Brentford have hit the back of the net 54 times and Leyton Orient, who occupy the second automatic promotion place ahead of Wanderers on goal difference, have scored on 64 occasions.

"Once we started to score goals, confidence has developed throughout the team," said Jackett

"It's also being able play from the back, controlling the midfield, passing the ball very well.

"We did have a spell when we were playing well enough and passing the ball, but not necessarily hitting the target."