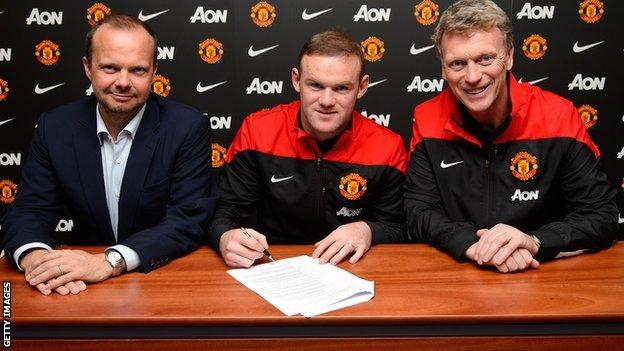 The 28-year-old England international has extended his current contract by four years in a deal worth up to £300,000 a week.

Rooney told his website: "I'm happy everything is now finalised and I can carry on concentrating on my football."

"Manchester United's decision to award Wayne Rooney the most expensive long-term contract in the club's history is more than about just keeping one of their most influential players at Old Trafford.

"This is about a demonstration - some might even say desperation - to show that United under David Moyes can still keep their best players even at a time when their own status in the domestic and European game is reduced, no matter how temporarily."

Rooney moved from Everton in 2004 and is 42 goals shy of passing Sir Bobby Charlton's record of 249 United goals.

He has scored 208 goals in 430 games in all competitions for the Red Devils, and will be 33 at the end of his new deal. He will become a club ambassador when he retires from the game.

Rooney said of potentially breaking Charlton's record: "This is definitely something I would like to achieve. If I managed to do it it'd be something I'd be very proud of. My aim is always to score and create as many goals as possible, so if I can continue to score regularly and break the record then I would be delighted."

Manchester United boss David Moyes added on United's website: "I said last July that Wayne has an outstanding chance to be a true legend of this club's long and rich history. He is just 42 goals away from overtaking Sir Bobby as our record goalscorer and becoming the first United player to hit 250 goals for the club.

"These opportunities only come to special players and I'm confident Wayne will set a new record that will take decades to reach."

Rooney, whose previous £250,000-a-week deal would have expired next year, had looked set to leave Old Trafford last summer after former United manager Sir Alex Ferguson claimed he had asked for a transfer - something the player denied.

Chelsea had more than one bid for him rejected but new boss Moyes insisted he wanted to keep his former Everton player at Old Trafford.

Moyes told BBC Sport: "We always felt Wayne wanted to stay. He's a great player and hopefully we can keep him at a really high level which he has showed this season.

"We're all delighted. It's part of the rebuilding and part of it is also to make sure you keep the players you really want to keep.

"The record signing of Juan Mata from Chelsea in January was the first part of what Woodward and Moyes hope will be a three-step strategy back to the top.

"Rooney's new deal is part two while the summer is phase three. That's when we will really be able to judge how serious the owners are about rebuilding United's under-powered squad.

"Mata's arrival and Rooney's decision to stay - having been courted first by Manchester City and more recently Chelsea - will surely help the club attract top talent before the start of next season."

"Everybody would want him, you could see the clubs who did want him but there was never a chance he was going to leave Manchester United, certainly not on my watch."

It seems likely that next season will be Rooney's first out of the Champions League since his move from Goodison Park 10 years ago.

United are 11 points off the top four, although they could still qualify by winning this season's tournament.

But Rooney said he was not concerned, preferring to concentrate on the club's long-term future.

The Liverpudlian said: "I know that's what some of the press thought but it's not a massive concern for me. This is because I know the direction that this club is going in, and if we don't make it this season then we will come back stronger and claim a Champions League spot next season.

"Let's not forget we still have a chance this year, some of the other teams are playing well but we have a strong squad here and if we have a positive end to the season then who knows what can happen."

Rooney has won five Premier League titles and the Champions League in his time at Old Trafford.

The forward, who returned to first-team action at the end of January after nearly a month out with an injury, has made 28 club appearances this season and scored 11 goals.