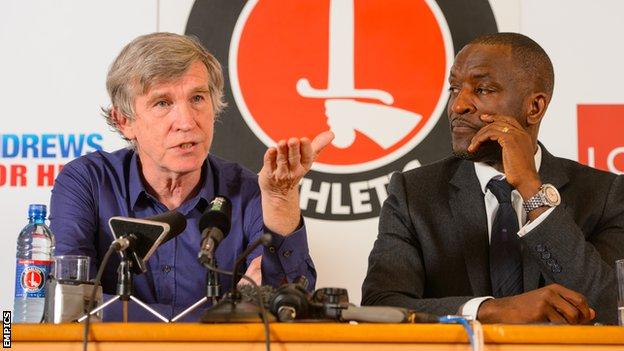 Charlton owner Roland Duchatelet says he will not involve himself heavily in the day-to-day running of the club.

The Belgian, who owns six clubs in Europe, bought the Addicks in January.

"The team here in Charlton is to make it happen, not me," Duchatelet told BBC London 94.9.

"I will be there in the background as a shareholder and to help a little bit when it is absolutely needed. They shouldn't expect a big daddy who will do everything for them."

He added: "They will need to do it themselves. My role as owner is to bring financial stability."

The 67-year-old, who held his first news conference since buying the Championship side on Thursday, says each team is "a club in its own right" and each one "needs to care for their own destiny".

"Charlton is a club with a huge tradition, a big fanbase, a good mentality and a strong youth academy," Duchatelet explained. "These are very positive things for a club.

"I think it is not easy to be involved with that many clubs already. We will give it a break now."

Five of Charlton's six January signings came from Duchatelet's own network of clubs and he says boosting Chris Powell's squad was a necessary step.

The fans are positive and accept that everything does not go well all the time. That is a major asset of this club

"He [Powell] needed to be creative in the past as he didn't have a big luxury of players," Duchatelet said.

"It was tough for him to get players and that is something we had to change.

"That is the reason why we transferred a number of players and that was very important to stabilise the club. We hope we are luckier in the coming games so that we can keep the club in the Championship."

Duchatelet insists he is with Charlton "for the long-term" and his ultimate goal is to see the Addicks return to the Premier League.

"The fans are positive and accept that everything does not go well all the time. That is a major asset of this club," he added.

"If we can make the machine work and there are no big problems in certain aspects I am convinced we can achieve it.

"But it will not be immediately - it will take time."