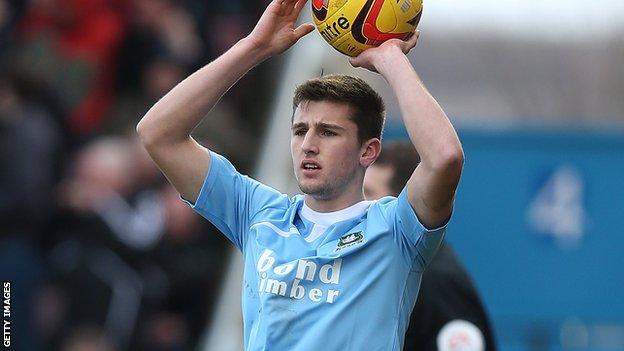 Purrington, who signed his first contract on his 17th birthday in May 2013, has made 11 starts for the club since his debut on Boxing Day.

"I hoped I might get on the bench and try to work my way into the squad that way," he told BBC South West Sport.

"I never thought I'd play as many games as I have."

It's a massive step up

Purrington, the nephew of England rugby legend and 2003 World Cup winner Richard Hill, has attracted rave reviews for his composed displays since coming into the first team.

Argyle's current status as a mid-table League Two side has led to, even at this very early stage in his professional career, stories linking him with a move away from the club he has been at since he was nine years old.

"I haven't taken too much notice of it really, I just want to play as much as I can," he said.

"If it attracts attention then it does, but I just want to do as well as I can for Plymouth and work hard."

Purrington said his debut, which came in a 3-2 win over Oxford, was a bolt out of the blue, with Pilgrims boss John Sheridan leaving the news of his selection until the last minute.

"He didn't tell me until the morning of the game and as soon as he told me I was quite nervous," he said.

"But he just said 'get your mum and dad up to the game, you're playing'.

"I think he did the right thing telling me late because I wouldn't have wanted to be thinking about it too much, but once I got on the pitch it was fine.

"It meant a lot. Having been here for so long and working your way up through the ages. It felt like I'd made it through all that time to get to that point of making the first team - but once you've done it once you want to push on.

"It's a massive step up. The tempo and the concentration you need is so much more to what you need at youth-team level or in the reserves. It's just so much faster.

"I'm slowly getting used to it and the guys keep talking to you through it during the game and that helps a lot."

Among the crowd at the Kassam Stadium for his debut was his uncle, widely regarded as one of the best back-row players in the history of English rugby.

Hill tweeted at the time: "Allowed to be biased. Outstanding debut."

But there was never much chance of Purrington following the former Saracens star into the oval-ball game.

"I played a bit of rugby at school but nothing really - certainly not to his standard!" he said. "It was always football for me.

"But it's definitely helped having him around to give me advice over the years, because he's been through it all at the top of his sport. If I ever want to talk to him, he's always there."