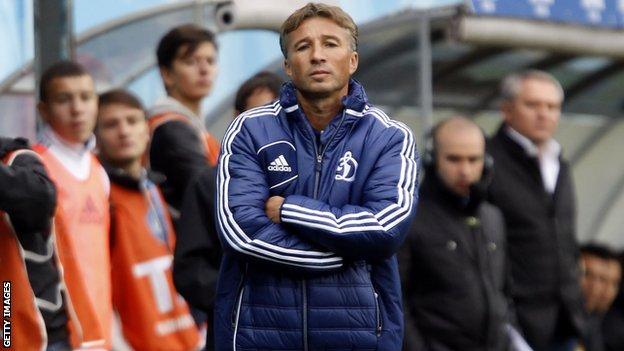 Former Chelsea defender Dan Petrescu says he would not be able to turn down the chance to one day return to Stamford Bridge as manager.

The former Romania international, 46, is the current boss of Dinamo Moscow, where he is contracted until 2015.

"I have a contract with Dynamo and I have to respect that. If one day Chelsea came along, I could not turn it down," he told BBC World Service.

Petrescu was part of the Chelsea team that won the FA Cup, League Cup and Uefa Super Cup in the 1990s.

He retired in 2003 and has gone on to enjoy success as a manager, winning domestic titles in Russia and Romania.

"My memories are only fantastic from Chelsea after five years there, winning so many trophies, being with great players and fantastic fans," he added.

"I have a daughter who is named Chelsea. It was everything for me. It was the best time in my life as a football player, this is for sure."

Crystal Palace chairman Steve Parish had explored the possibility of offering Petrescu the chance to return to England, before opting to appoint Tony Pulis as manager.

"I was very close but I have a contract and I have to respect that," said Petrescu.

"Crystal Palace was a good opportunity for me and I hope there will be another opportunity to manage in England, especially in London."