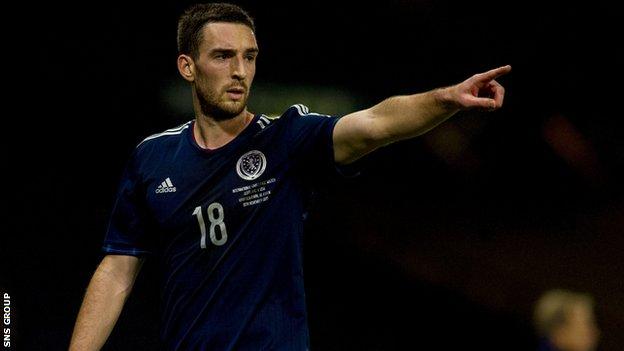 Left-backs Lee Wallace and Paul Dixon have expressed disappointment at not being selected for Scotland's friendly with Poland on 5 March.

Dundee United teenager Andrew Robertson has been given a first call-up by manager Gordon Strachan.

"I have a message for Gordon; come and have a look at Graeme Shinnie if you're looking for a left-back," said Hughes.

I was quite annoyed not to be involved this time

Robertson, 19, is not the only player in the squad capable of filling in at left-back in Warsaw.

Charlie Mulgrew has occupied the position for Scotland, although he is usually deployed in midfield by Celtic, and right-backs Steven Whittaker and Phil Bardsley have both covered the opposite flank for their country.

Huddersfield Town's Dixon won three caps in late 2012, against Serbia, Macedonia and Luxembourg, but feels he is out of the picture now.

"I was quite annoyed not to be involved this time, because given how I have been playing, I thought I would have a good chance of being involved," the former Dundee United defender told his club's official website.

"This has shown me that I don't have much chance.

"I'd love to play for Scotland again, but if I never do, I can hold my head up high. I played three times for my country and I'm unbeaten, as well as being man of the match on my debut."

Wallace won the first of his eight caps in 2009 and played twice for Strachan's side last year, coming off the bench against USA and Macedonia.

The Rangers player praised the national manager for phoning to tell him personally that he not been included.

"Of course there is that bit of disappointment, but I said to him I appreciated the call," explained the 26-year-old.

"I thought it was good management in the sense that he said I deserved a call, he was aware of what I was doing and I just missed out this time around.

"I've always been professional, I've never taken the huff and I've never been too downbeat about it.

"The new manager came in and said, if you were doing well at that particular time, you would always have a chance no matter what level you were at.

"I took great confidence from that and the fact that I was in three or four of his squads. I will never get too negative on the situation."

Shinnie, 22, has been capped at under-21 level and his manager thinks he deserves to be considered for the senior side.

"I'm delighted that Andrew Robertson got his call up," Hughes told BBC Scotland. "He's a wonderful player and he's going to have a wonderful career.

"But, right at this moment in time, if he's a better left-back than Graeme Shinnie, I've not been playing football for 25 years.

"Maybe Gordon's not seen him at left-back because he's been at right-back and midfield since I've been at the club.

"He's been back at left-back for the last couple of matches, rampaging up and down and he delivers a great ball."