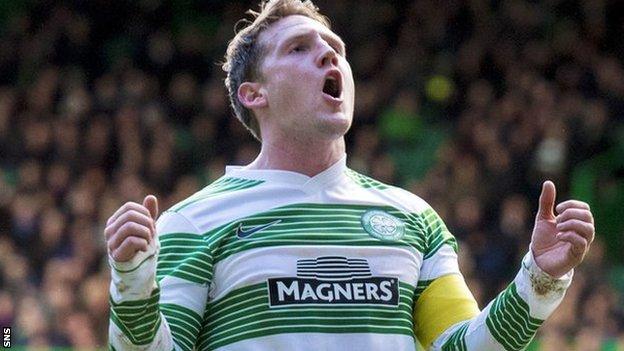 Commons signed a three-and-a-half year contract in January 2011 and the 30-year-old has publicly stated his desire to end his career at Celtic Park.

"He's got an option on his contract and I'm pretty sure we'll be taking the option and then we'll look at things after that," said manager Lennon.

"He's been a huge player for us this season and he seems happy here."

Commons, a £300,000 buy from Derby County, has scored 21 times in 33 appearances this season, his first after announcing in May that he was retiring from international football with Scotland to concentrate on his club career.

"He's had a brilliant couple of seasons," said Lennon of the English-born player. "Three out of his four seasons have been top class and I think there's more to come from him."

Commons' former team-mate, Joe Ledley, this week told BBC Wales that he planned to sign a new contract with Celtic until the Glasgow club accepted a deadline-day offer from Crystal Palace.

However, Lennon pointed out that the Wales midfielder had had plenty of time to accept the club's offer before he was sold.

"The contract was on the table for quite a period of time," said the Celtic boss.

"It was not as if it was a last minute thing. It was there on the table for at least two to three months.

"It was unfortunately a scenario where we lost out and lost a very good player."

Meanwhile, Lennon is hopeful that goalkeeper Fraser Forster will not only break a long-standing clean-sheet record against Hearts but that his side can extend their unbeaten run in the Scottish Premiership this season.

Forster, who has one England cap, has gone 12 consecutive Scottish top-flight games without conceding a goal and is 31 minutes away from breaking Bobby Clark's record with Aberdeen.

"It would be a great record to break," said Lennon. "It's not been easy.

"Fraser's had to pull off some fantastic saves along the way, but he's almost there.

"But the main focus is on the team obviously and how we play tomorrow.

"That's what is keeping us motivated at the minute - to keep the two runs going consecutively."

Lennon added that Forster also had the goal of forcing himself into Roy Hodgson's England squad for this summer's World Cup finals.

"He's got plenty of motivation and hopefully a World Cup to look forward to. He must maintain his standards to make sure he travels to Brazil," said the Celtic boss.

"It is a great incentive and a huge incentive for him."