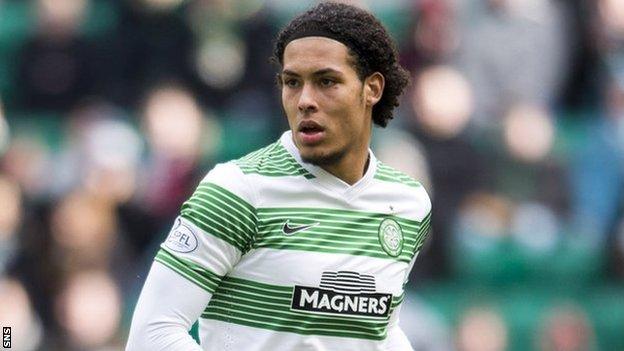 Asked if it would be a blow to the player, the Celtic manager said: "I'm sure it is, although we haven't really spoken about it at length.

"I'm surprised because I think he's good enough to be in the provisional squad of 33.

"I don't know why. You'd have to ask the coach of Holland about that."

Van Dijk has been linked with Arsenal, Manchester City and Manchester United after impressing in his first season with Celtic, having joined from Groningen last summer.

"He's played very well and been very consistent domestically and he was superb at the highest level in the Champions League," said Lennon.

Van Dijk was a replacement for Kelvin Wilson, who moved to Nottingham Forest, and Lennon admitted that the Dutchman had exceeded his expectations.

"We knew we had a good player having seen him and then looked at him in pre-season, but it's his temperament you don't know about beforehand - he's got a fantastic attitude to the game as well," said the manager.

"Kelvin was an excellent player here and had a big bearing on the Champions League last year - he had some great games.

"We felt it might take a little time to replace him, but Virgil's been a very good fit."

Lennon stressed that Van Dijk, who has represented his country at under-21 level, should not dwell on missing out on Dutch coach Louis van Gaal's initial squad.

"But he's what you want in the modern-day centre-half.

"He's big, he's got great timing in the air, tactically proficient with both feet, he's got good pace and reads the game very well."