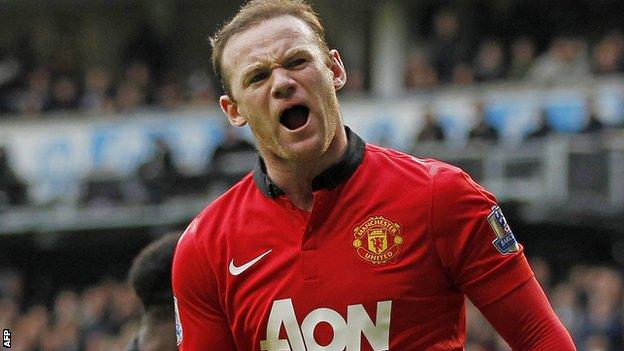 With projected revenues of £420m this year, there is no question Manchester United can afford to make Wayne Rooney the best paid player in the Premier League.

But many people will be asking this weekend if the 28-year-old is really worth all that money?

To answer that you need to separate his value to United right now from how some might view his broader value in the transfer market.

For all the income they generate, United are a club going through a difficult transition. They are way off the pace in the Premier League and struggling to qualify for the Champions League next season.

The financial impact of failure this season will not dent the money making machine that is Old Trafford, but long term decline? That's a very different proposition.

All of this has placed huge pressure on the club's new manager David Moyes and executive vice chairman Ed Woodward to show the club is still a force to be reckoned with despite the retirement of the formidable Sir Alex Ferguson.

The record signing of Juan Mata from Chelsea in the January transfer window was the first part of what Woodward and Moyes hope will be a three-step strategy back to the top.

Rooney's new deal is part two while the summer is phase three. That's when we will really be able to judge how serious the club's American owners, the Glazer family, are about rebuilding United's under-powered squad.

Mata's arrival and Rooney's decision to stay - having been courted first by Manchester City and more recently Chelsea - will surely help the club attract top talent before the start of next season.

The other thing to consider is that Rooney had just 18 months remaining on his previous deal. United knew they faced the possibility of him leaving for nothing. By signing him up for five and-a-half years, they have protected the value of arguably their most valuable and recognisable playing asset.

So while the £85m agreement up to 2019 looks exorbitant, it's probably cheaper than United having to find a replacement in the transfer market and pay his wages. The total cost would have probably been much higher.

It leaves United free to spend their money elsewhere - with midfield and defence arguably a greater priority.

The deal Rooney has signed is, I am told, worth around £250,000 a week in basic salary. What makes the new contract potentially much more lucrative to the England striker is an agreement with the club to market and exploit his individual commercial rights around the world.

This obviously has benefits for both the club and the player but there is no doubting United's hugely successful commercial operation could help take Rooney to a new financial level and certainly on a par with Barcelona's Lionel Messi and Real Madrid's Cristiano Ronaldo.

In playing terms it would be hard to argue Rooney is in the same league as those two.

But as things stand he is United's most marketable brand and that is ultimately why the club couldn't afford to let him go.