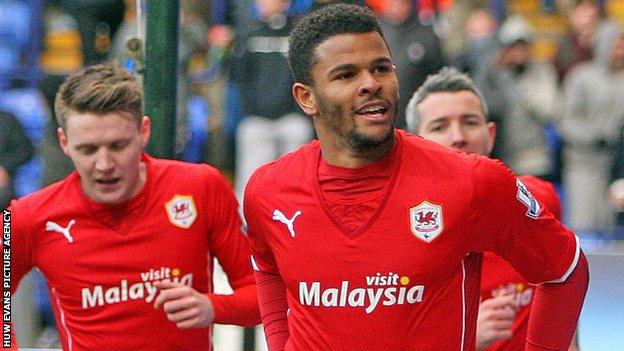 Campbell came through the ranks at Manchester United, where the Norwegian began his coaching career after his playing days.

The 26-year-old has netted four goals since Solskjaer replaced Malky Mackay as Cardiff manager in January,

"As a youngster I was always trying to learn a lot off him. . . it's great to have him as manager," said Campbell.

"It's great for me and the rest of the forwards to learn from him."

Scored seven goals in 12 appearances to help the Bluebirds win the Championship title and promotion to the Premier League.

On Saturday the Bluebirds face a Hull City side currently 13th in the Premier League table, five points ahead of second from bottom Cardiff.

Campbell spent the 2007-08 season on loan at Hull from Manchester United, scoring 15 goals in 34 games.

The England international also worked with Tigers boss Steve Bruce during his spell at Sunderland.

But Campbell says there will be no sentiment on Saturday and describes the game as one which Cardiff have to win.

"We need to win no matter who we're playing against," Campbell said.

"We really need some points on the table. You look at the table and it's really, really tight

"You've got to keep strong and keep focused. At the start of the season we would have been happy to finish just above the relegation zone.

"We're not a million miles away from that so hopefully we can stick together as a group and win some football."