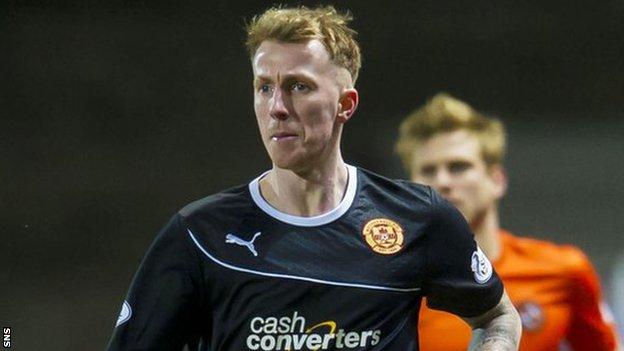 Motherwell signed Craig Reid in time to face Dundee United, but he could not prevent a 3-1 defeat at Tannadice.

The right-back has signed until the end of the season after training at the club for the past few days.

He came off the bench as a Gavin Gunning double and a Ryan Dow strike eclipsed John Sutton's penalty.

Manager Stuart McCall said: "He can play in many positions and, with the injury list we've got at the moment, he's a welcome addition."

The 27-year-old spent time at the club during the summer and was part of the pre-season trip to Spain, but a lack of funds put paid to a move and he signed a short-term deal with Morton.

We've still got the stomach for a battle and we proved that in the second half.

Now with the club struggling with injuries ahead of the league run-in, Reid's arrival bolsters the threadbare squad.

"Financially, it's not anything to write home about, but it's not about that," McCall told BBC Scotland.

"He wants to put himself in the show window and we thought, if we can get it done and signed up, and he's happy to do that, then he can be valuable."

Reid, who was also previously at Celtic and Queen of the South, told the Motherwell website before coming on as a substitute against United: "I am delighted to be here, it's great to have finally signed.

"I came in during the summer and I am familiar with the place, the boys and the management here.

"I was disappointed things didn't work out in the summer as I really wanted to come here, but Stuart McCall was always honest with me and I understood and appreciated that.

"I am here now though, I feel fit and I am looking forward to getting started."

Reid's 67th minute debut came amidst a disappointing evening for the Steelmen as poor defending proved their downfall in Tayside.

Ryan Dow pounced on a poor Shaun Hutchinson pass-back to make it 1-0 before Gavin Gunning fired in a second from close range.

John Sutton struck a second-half penalty after Gunning's free-kick doubled his tally, however a couple of half-hearted penalty appeals apart the visitors rarely looked like recovering.

"The way we lost the first two goals were poor and sloppy," said McCall. "The first goal happens in football, but the second one is more disappointing because we've not done the basics at a corner kick.

"Second half, losing a goal in the first minute to a deflected free-kick, it would be easy to just crumble and roll over and let United come down the hill and beat us by four or five.

"But I thought we showed a lot of guts, determination and character in the second half and that's what we're about.

"We weren't good enough in the first half, we gave them a two goal start and we can't afford to do that, but we've still got the stomach for a battle and we proved that second half."