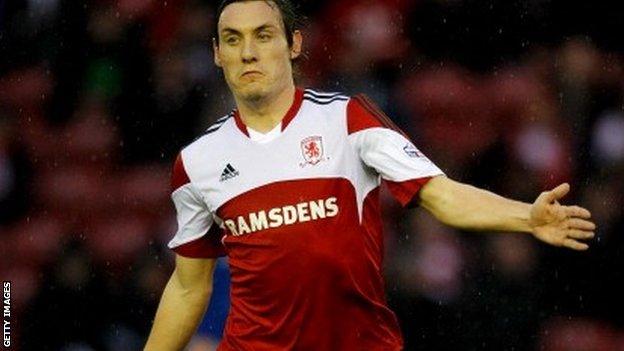 Boro's Jacob Butterfield had a strike which appeared to cross the goalline ruled out before Leon Best went close for Wednesday.

The decisive moment of the game came late in the second half when Dean Whitehead was deemed to have handled Best's stab towards goal.

The midfielder was sent off and Nuhiu struck from the spot to secure victory.

Nuhiu's goal maintains Wednesday's fine record against Middlesbrough at Hillsborough, where the Owls have now beaten the visitors in five of their past six meetings. The win also ended their run of three successive home defeats in all competitions.

But Boro are now winless in seven games, failing to score in any of those.

The visitors had their chances against Wednesday, with Kei Kamara firing a first-time volley straight at Chris Kirkland and Butterfield's driving effort cannoning off both uprights before Kirkland gathered. The ball looked to have crossed the line but no goal was given.

After the break, the lively Chris Maguire sent a free-kick over the crossbar before Hutchinson tested Boro's debutant goalkeeper Tomas Mejias from long range.

It was then midfielder Giles Coke's turn to be denied by Mejias before Whitehead was sent off for conceded the 87th-minute penalty, which Nuhiu converted coolly.

Middlesbrough manager Aitor Karanka on Jacob Butterfield's disallowed goal: "I can't say anything because I couldn't see the ball.

"For me, the linesman couldn't see the goal in our favour and he could see the penalty. This is the problem.

"We lost the game because we didn't play well. I don't have to put excuses on the referee or linesman. We had four or five chances to score and if we had scored a goal we would have won the game."

Sheffield Wednesday head coach Stuart Gray: "We deserved the win. The disappointing thing was the first half - there was no intensity.

"One thing you do know is that Middlesbrough are going to have a lot of possession of the ball so we tried nullifying that by pressing them up high but, then, it was one, two, maybe three touches too much instead of moving the ball quicker.

"If you'd said to me before the game: 'Play ugly and win one-nil', I'd have snatched your hand off."