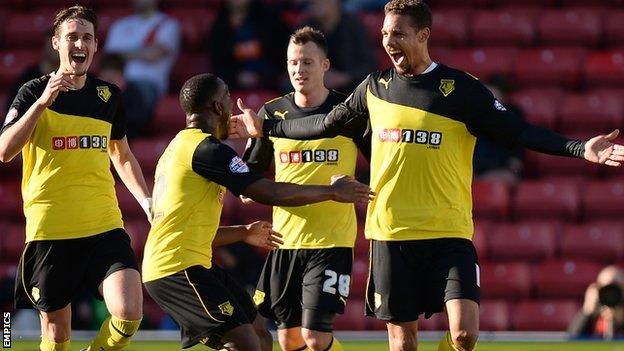 Troy Deeney doubled their lead after exchanging passes with Pudil before Ranegie finished Cristian Battocchio's pass to make it 3-0 at the break.

Visiting striker Ricardo Fuller forced a save from Manuel Almunia before Deeney curled home a fourth.

When Blackpool last won a league match they were fourth in the Championship table. At the time they were 19 points clear of the bottom three, they are now just eight points above the relegation zone.

The Tangerines, under the caretaker stewardship of Barry Ferguson, have not won since a 2-0 win over Sheffield Wednesday on 30 November.

They kept the hosts out for just 15 minutes before Ranegie, who joined for an undisclosed fee from Udinese in January, was left unmarked to power home from Pudil's corner.

Former Walsall striker Deeney netted his 50th goal for the Hornets via a slight deflection before Ranegie quickly made it three with the Blackpool defence in complete disarray.

Fuller forced a save out of Almunia in the second half before Deeney curled in from the edge of the area to complete the scoring.

"I'm happy for Ranegie and also for Troy for the kind of goals they scored. They were very nice goals.

"In the box it is very important to have physical qualities, but sometimes we need more agility in other games.

"But don't only watch how tall a player is, but what is in their heart. For English football you need a bit heart and I hope Ranegie will have this. Today he scored two goals, but I'm not focused on their goals, I'm focused on their work.

"I am very happy about Troy today. The fourth goal was really nice. I hope that he will have the opportunity to score these goals in a stadium wherever he will land, maybe this will be with Watford, maybe not."

"We simply were not good enough. We got beaten by a better team.

"What's been said in the dressing room will stay inside those four walls but you can pretty much guess what has been said.

"The players have let themselves down. There are five contracted players for next season here. The rest are out of contract. If they want to get themselves a club they certainly haven't done themselves any justice today.

"The quality of the goals we conceded is a major worry. All I can do is put together training sessions and work on things like corner kicks and free-kicks and go from there."