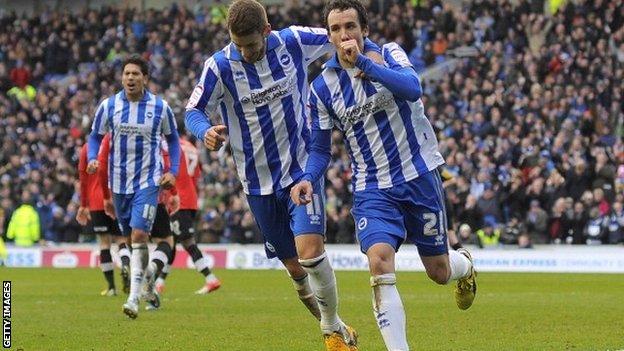 A controversial penalty gave Brighton victory against relegation-threatened Millwall and took the Seagulls to within three points of the play-offs.

Danny Shittu was deemed to have fouled Jesse Lingard and David Lopez found the corner of the net.

Millwall will regard themselves as somewhat unlucky to concede the penalty as there seemed to be minimal contact between debutant Lingard and Shittu, but Lopez converted from the spot to clinch the win with his fourth league goal of the season.

The visitors could have doubled their lead when Ulloa found Lingard with a brilliant cross, but Ryan Fredericks did well to deny the Manchester United loanee.

Shittu should have done better with a header after the break and, then, Easter struck the woodwork when just six yards from goal.

Late on, Lions debutant Owen Garvan went close from long range but the match ended in defeat for the hosts, their sixth loss in 10 league games.

Brighton assistant manager Nathan Jones on the penalty: "It was a difficult game. The penalty could have gone either way.

"Danny Shittu leaned on Jesse [Lingard] inside the box and he is a very strong lad. These things even themselves out. We have had stonewall penalty appeals turned down, but maybe we got a bit of luck.

"We would like to be in the play-offs but it is very tight and we have had a lot of games to contend with."

Millwall boss Ian Holloway: "It is shoulder to shoulder, if anything. I can't say that there wasn't enough contact because Danny is built like a proverbial.

"We haven't got anything like the result we deserved. I want my lads to not shout at referees because we have been fined £16,000 in the last few weeks and it is my job to get fairness.

"A referee should walk into this ground and be ready to be fair to both teams, but I don't think he was biased. It was a mistake."