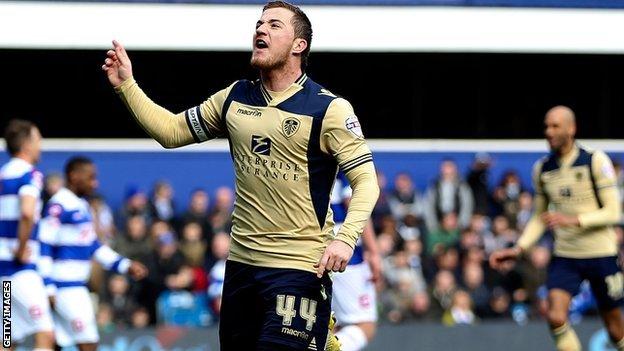 Championship promotion hopefuls QPR came from behind to claim a point against Leeds, but their winless run was extended to five matches.

Ross McCormack, who had earlier seen a penalty saved by Rob Green, gave Leeds the lead with a deflected free-kick.

The hosts levelled just before the break when Jermaine Jenas slotted past Jack Butland from the edge of the area.

The draw does little for either side's promotion hopes, with QPR nine points behind second-placed Burnley, while Leeds are eight points adrift of the play-off places.

QPR have now failed to keep a clean sheet in their past 10 matches. The last time they stopped the opposition from scoring was in the 0-0 draw with Watford on 29 December

The hosts had lost their past three matches and went into the game looking for a first home win over Leeds since November 1994.

But after an even opening few minutes, the visitors were presented with a great opportunity to open the scoring when Richard Dunne was adjudged to have felled McCormack in the area. The Scot took the kick himself but his tame effort was easily saved by Green down to his left.

The Leeds skipper did not have long to wait to make amends, though, netting his 23rd league goal of the season on 14 minutes.

After Traore fouled Rodolph Austin on the edge of the area, McCormack put Leeds in front from the resultant free-kick, via a slight deflection off Rangers striker Kevin Doyle.

The visitors were looking good value for their lead; new signing Wickham linking up well with McCormack on two occasions, though neither could force Green into more action.

Harry Redknapp's side were in danger of being overrun and the QPR boss switched to a 4-4-2 formation to give lone frontman Doyle more support.

The move paid dividends as Jenas played a neat one-two with the Republic of Ireland international before sliding a measured finish beyond Butland just before half-time.

Straight after the restart the R's created a fine chance to go ahead with Ravel Morrison threading a pass through to Traore, but he fired straight at Butland from eight yards out.

With the game getting scrappier, Leeds rallied and Wickham flashed a low shot just past the post from the edge of the area before forcing Green into a fine late save with a header from Alex Mowatt's free-kick.

QPR defender Clint Hill thought he had snatched victory with a fiercely-struck volley in added time, but his effort was rightly ruled out for offside.

"You'd take a point before the game here, but as the game panned out it was disappointing not to take all three.

"We should maybe have killed the game off in the first half. But it is what it is, another point on the board and I just want positivity around Leeds United. We haven't had much lately.

"We are still waiting for the takeover to be completed but it is a much calmer place now."